I signed up for this race because I had nothing on the calendar for March. Also, Cool was my first mountain bike race outside of Prairie City. Dude! I’m growing up, with a big girl bike (Grammo Toa), doing a big girl race (Sport 20-29)! I was all excited and crap and then, on a frickin’ rest week, I hurt my back. A rest week? Really!? I’m used to pain. My back is super crooked so I know what living in daily pain is, and I put my big girl bibs on and keep riding through it. However, this time, I wasn’t able to move. I don’t want to say that I can’t fight through the pain because I’m becoming an old hen (okay I’m not an old hen), but damn… I’ve never actually been bed ridden due to this much back pain.
This race went from being exciting to being dreaded. I didn’t want to do it. I didn’t ride my bike for two consecutive days, and we all know that I don’t do that. Not only did I not ride for two days, I didn’t ride the two days prior to the race. So, I was all “bleh” physically and mentally. Why mentally? Because I’m the type of person who needs to do something active, whether it’s the bike, lifting, or working, to keep from going completely insane, and we all know I’m not far from jumping that insanity line. Hello! Psychologist. 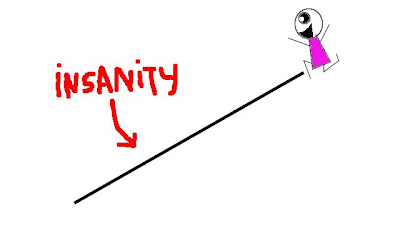 So, I dreaded the whole thing. In fact, I regretted registering for the race. I pretty much knew I was going to be DFL so I agreed to go to a hockey game after the race. I was to leave Folsom at 1400 to be at Stockton by 1600 for the start of the game. So, at least that was something to look forward to, right?
We lined up like cows at the starting line. When I got to my area, there were only two other girls. One who now races for CSUS, me, who used to race for CSUS, and the other girl who is from Santa Cruz who also talked about the racing at UCSC. It was like a collegiate reunion.
I’ll put this out there: The Clydesdales started before us. 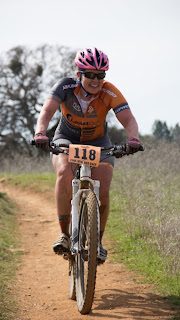 So, we start, and we pretty much catch up to some of the Clydes right away. The first hill isn’t really a hill. You can pretty much big ring/SFR it, buuuuut, people were getting off their bikes to walk up it. Because there was a sea of people who were walking it, I had to get off my bike and run. After that, I passed enough people to where I could get back on and tackle the next little hill (again, big ring). I was able to weave around enough people to get some speed going. I pretty much looked like a midget passing those big guys.

The downhills were easier than I remember, but I was also in race mode so I was taking more risks that I would on a regular ride, usually because my regular mountain bike rides are me going, “oohhhh pretty flower!” or “derp” or “MAN DOWN!” This race has a few sections that give me trouble. One of them is the really rocky downhill, but I kept remembering Asa saying that my bike wants to go over stuff, so I pretty much pointed and shot, and it worked.


Yeah, I was totally going, “Yeah, buddy! You got over that one. Way to go!” I had to pump myself up, okay? The creek is a section that gives me issues, too. I can sometimes clear it, I sometimes can’t.
During the second lap, I didn’t clear it, and some dude behind me says, “Why are you stopping!?”   “I’m a chicken shit,” I replied.   “No. You’re descending way too fast to be a chicken shit.” Ha! Awesome. I’m used to being the slowest descender. Then again, I mostly ride mountain bikes with downhillers, ex-pro/CAT 1 downhillers, and people who give no shits when it comes do a downhill. I guess my slow is normal people’s fast. 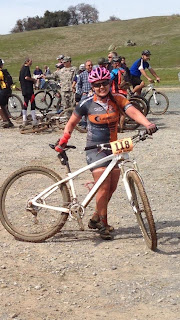 The hills were fine. The second lap was harder because my back decided that it was going to tell me that it was definitely not happy. I big-ringed most of the hills, except for the really steep ones. I got stuck behind a fairly slow climber up one of the hills and I didn’t know if I could climb that slow on the mountain bike; I was afraid I was going to tip over. Those SFRs that Coach has me do really help with everything, though. So, I pretty much SFR’ed and didn’t tip over. Yay me. Or something.
I also rode over a lot more stuff than I did on the pre-ride. Things weren’t as scary. The only time I messed up was when I dropped my chain and I had to run up the hill. It was going to be faster and easier to run up the hill than to try to fix the chain right there and to start on the hill, so screw it, I ran. All of that trail running I’ve been doing with Dog helped. Having to drag Dog’s 55-pound ass up the hills made dragging my bike up the hill even easier. 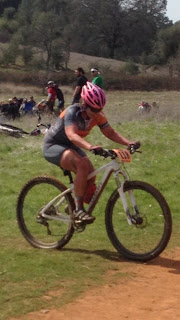 I passed one of the Expert women during my second lap. She told me that I was the first Sport woman she has seen so I’m probably winning. That made me pretty happy since I didn’t know which way was up at that point of the race. Mountain bike races are really confusing. You start in a sea of people and you don’t know who is in what category. So, you know, I just kind of rode my bike and hoped I didn’t die, or that my back didn’t completely give out while I was in the middle of the course… or the creek. I didn’t want to drown. The news that I was most likely in first gave me a little boost since my back was hurting really badly by mile fifteen. Not a happy camper. I shouldn’t have said no to the beer hand-up.
Some dude and I rode together for the last couple of miles of the race and we joked around. Hey, if you’re not having fun at a race, you’re doing it wrong! He also told me that my teammate was doing awesome and was right on it. Mason ended up third in the SS Expert category!
Before the finish, there’s a huge mud pit. You can either go through it, which people encourage, or you can go around. Every lap, you would hear people chant, “MUD! MUD! MUD!” and each time, I said, “Nope! Nope! Nope!” I went around, but I almost ate it anyway and I just said, “You got the same result!” I was super happy when I crossed the finish line. That was a tough race! 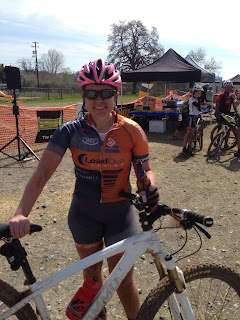 So, here’s me after we found out I won. I have a no-drinking rule during race season. The exception to the rule is winning. I need some motivation. T-shirts and free race entries only get you so far. 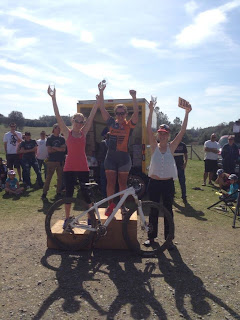 And there’s the podium shot.
Haha look at how short I still look.
So, there it is. This race went from being dreaded to actually turning out to be a good race. My back hurt like crazy after the race but it happens. I couldn’t not race this. I called my friends and said, “Oh hey, guys, I can’t go to the hockey game because I freakin’ won.”
“You what? Really?”
“Yeah. So… I gotta wait for the podium. Have fun at the game.” I apparently missed out on a good game, but they were all proud of me for not killing myself at this race and pulling off a “W.”
Miss K
(Re posted from seekayride)
A Cool Report..