Hey all! Been a couple weeks,but I wanted to capture the epic-osity of the story for you. I try to knock every blog out of the park. That’s actually really hard to accomplish a lot of the time, though. Things sound more epic in your head. But, I did manage to write this one.

My longtime readers (thanks guys!) already know that I double up my weekends with races quite often. I’ve even been known to triple up. And it generally means a great story, or at least one involving my legs hurting quite a bit. This was no exception.

I heard about the Grasshopper 1 week before it happened. A couple of my Victory Velo teammates told me about it while on a training ride. They though I should do it, it sounded fun, they were all caravan/carpooling to Occidental. Long story short, I was in the car early in the morning on Jan. 19th, headed to the 15th annual “Old Caz Hopper” 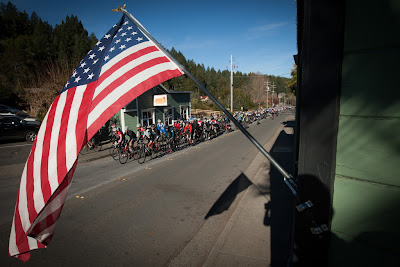 The Grasshopper isn’t technically a race. Even though there is a mass start and a finish line, and you are timed, it isn’t actually a race. The roads are not closed, there are no awards other than the raffle. It’s ridden more like a really hard paced Gran Fondo. And the course is so gnar that it is recommended to ride it on a cross bike.

The course is 53 miles of a combination of road, fire road, dirt, and beat-to-shit-why-hasn’t-someone-fixed-this-pavement-esque-ground. That is why they recommend a cross bike. I also saw people there on road bikes, and on mountain bikes. It is strange to be hammering a pace line on a road and be on a cross bike, while the guy next to you is on a mountain bike, and the guy in front is on a road bike. But I digress.

The ride was epic. There was a pack of super fast guys off the front, who I held on to as long as I could. Then I fell back into another pack. There were crashes everywhere. I went down in a corner that had black ice, but I was alright. The climbs were brutal, and the descents were sketchy (CX brakes do not stop you much). The descents were so hairy, the sides of the trail were littered with people fixing flats or mechanicals. There was a great deal of change in altitude, to the point that I would be hot and sweating and tearing off clothes, looking for shade and sucking down water on the climbs, and then bundling up and descending back into the cold and icy weather of the valleys. And the terrain was constantly changing. I crossed all manner of ground possible, as well as some gates, bridges, and a creek. 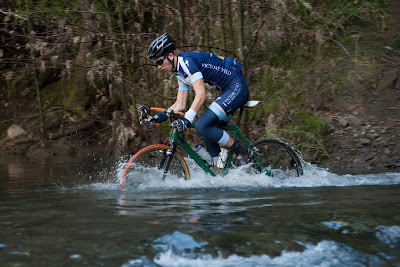 The Grasshopper loop was super epic. It was one of the more brutal events that I have done, and I was stoked to finish of 85/340 with a time of 3:39. I would definitely like to race it again next year.

Then, the next morning, I got up to go race my season opening mountain bike race. 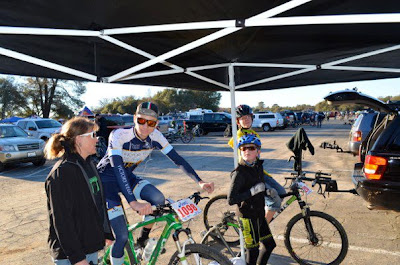 The TBF MTB Kickstart was my first mountain bike race of the season. It did not go well for me.

First off, let me start by stating that at this time in California, high school expert racers compete at a very high level. I see many posts from friends competing around the world. I saw one this Monday from a racer I know complaining about going to school after getting home from racing Cyclocross World Championships this weekend. Given the level of current high school athletes  it is very frustrating when we (HS Expert category) are started 1 min behind all age group experts. We spend at least the entire first lap (a little less than 6 miles) passing them. This past weekend, the leading high school racer beat the fastest pro of the day by 2 minutes. Anyway, I just sure wish the we could start with or ahead of the experts. 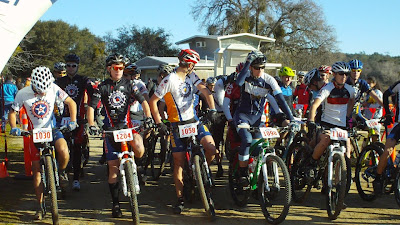 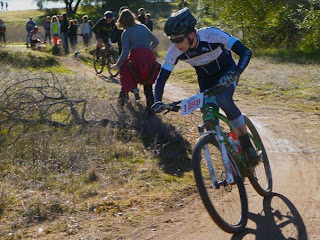 At the Kickstart, I rolled my tire completely off the rim on the first lap, spraying Stans everywhere. I then had to fix it, and try to catch up.

I was already hurting from the day before; there was no way I was going to catch up. So i just hung in there and rode hard to finish. After the flat, it was pretty uneventful. It was a very disappointing way to open the cross country mountain bike season. But then I realized that I can only go up from there. And that is exactly what I did.

Tune in later this week to find out how I did at TBF MTB #2 this past weekend.

Black Ice, Stans, and Pain: Old Caz and the Kickstart