I’m just now home from the last Sacramento CX race of the year, #8, held at Laguna del Sol, a clothing optional resort in Wilton Ca. Just like last year it was also the scene of the end of the season awards/raffle ceremony. As the MC I knew I had a long, hard day ahead. My GF (and photographer) Savannah and I rented a room for both the night before and after. I was up before dawn getting my set-up and early MC duties done then as usual I handed the mic off so that I could get in my warm  up. The course was a little long and had few places to rest. Lots of slow, wet grassy sections and short punchy climbs then dirt followed by fast, slick pavement. Just like last week I got off to a slow start and found my self near the back of the 55+ers. A couple of turns in there was a miscue that balled the racers up and I lost more time and a few more places. The technical sections were early on the course and when I made it out of those I was quite a ways back. And just like last week I started working on clawing my way back.

I’ve always thought it was funny to say there are 2 good race winning strategies. 1.”Get in front and stay there.” And 2.”Let ’em all go then chase ’em all down before the finish.” For some reason I’ve been trying #2. the last few races. I’m going to say that it’s not really a good plan, but after my start it’s all I have to work with. My legs actually are feeling pretty good and even though my guys are almost out of sight I start out after them. I’m slowly making my way back up through the pack. And just like last week I have know idea what place I’m in. I’d really like to podium one more time but all I can do is keep going after as many racers as I can. And again like last week I get in sight of Kurt. We are so spread out by this time that he may be the last guy I catch. It takes me a long time to close on him. I latch on as we come out on the paved section just before the end of the last lap. I let him pull into the final straightaway then make my move. I get him by about a bike length at the line. Woo that’s it my Sac CX race season is over. But I’ve got lots more work and one more ride to do yet. 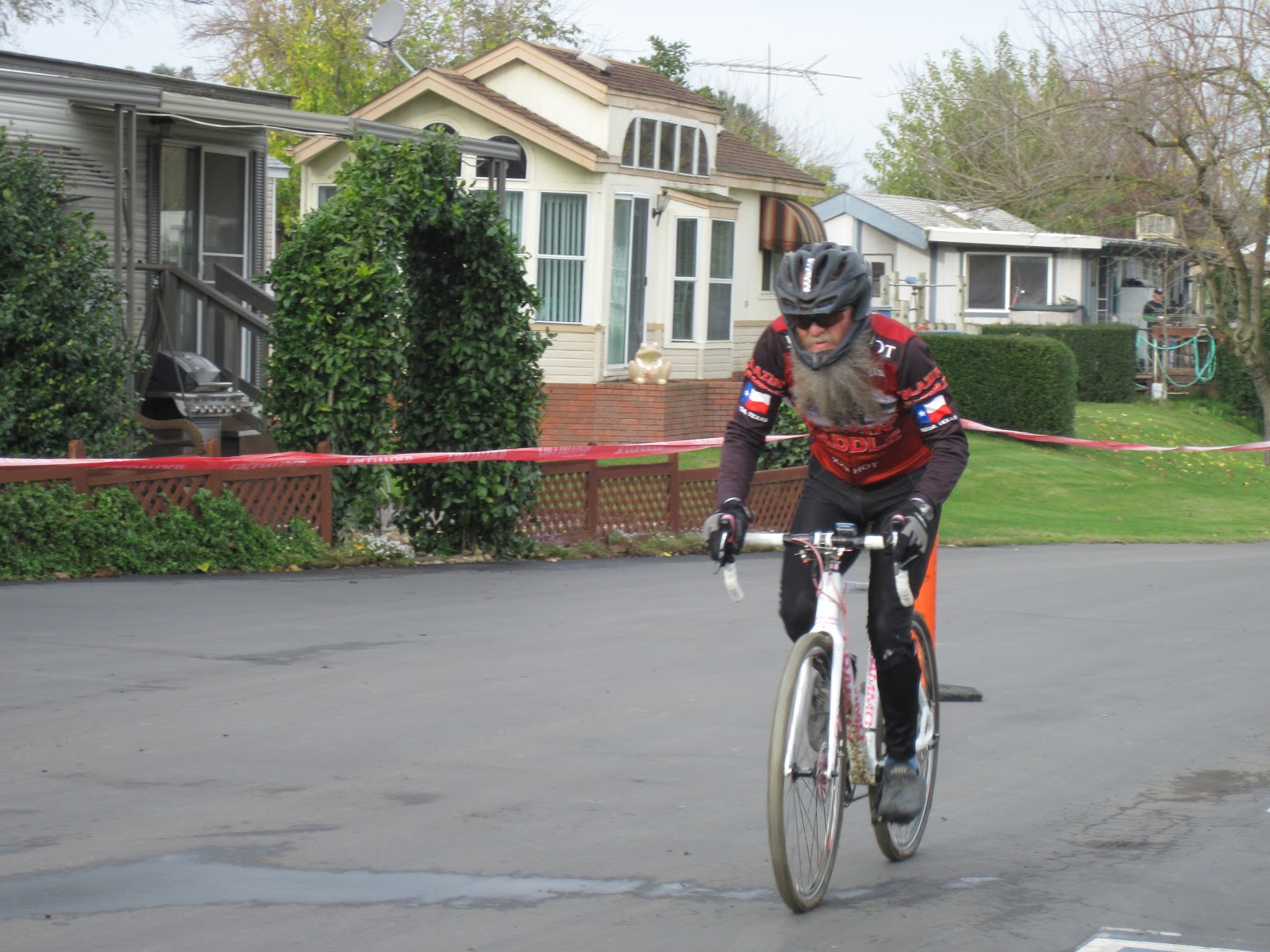 I rush back to the room and change and head back to my MC duties. But on the way I stop to check results and yay! I’m in third place, podium! I took third by just 1.01 seconds. Close but I’m really happy. So back to work doing my MC stuff, starting and calling races and announcing the podiums all day. Do you remember that I said we were at a clothing optional resort? Well the last couple of years it has seemed as if we should take advantage of this and hold a Naked Cross race. One lap, with a go around at the barriers. (If you think about it you’ll see why no barriers.) Top 3 men and top 3 women get the best podium prizes of the day. I get in this race just to be able to say I’ve raced naked. My buddy Kasea does the MC duties for me. There are younger, faster As and Bs in the race so for me its just a ride. For most of the “race” I’m right behind the women racers and in last place. I roll into the finish line in last to some pretty good cheers and head for my clothes. Both the men and women naked race winners want to be on the podium and have their pictures taken. (Like me they have found clothes.)

Some clean up and hustling around and I’m off to MC the awards/raffle party in the club house. We give away a lot of stuff and the end of season awards, medals and series winner jerseys. (Savannah thanks for the food, pictures and podium help all day!) I’m stoked to be on the Series Podium in 2nd place Men’s C 55+! Big smile! For the series I went 6th, 4th, 5th, 4th, 2nd, 3rd, 5th and 3rd. And finally thank you to my Grammo Paru. It’s sitting on the porch quietly waiting for a good bath and rub down. It has certainly earned it. It’s been great all season even when I haven’t been.

“The Bitch” is really awesome!

HAPPY HOLIDAYS EVERYONE and thanks for sharing my adventures!

Deja Vu All Over Again