Sacramento Cyclocross race #3 was held at The Old Sugar Mill in Clarksburg, just a little south of the City of Sacramento right on the Sacramento river. It was a new location for the series. The course setters had a lot of prep work to do as there was nothing even remotely resembling a ‘cross course in existence at the site. I wasn’t involved with the course work this time but I did take advantage of an opportunity to pre-ride the day before the race. I was “helping” by checking out their hard work. OK I was just trying to get a leg up on my competition with a little foreknowledge. And it did help; there were 2 tech spots that I sessioned until I could get through them; something that would have been harder to do on race day. I went into the race telling myself I had no more excuses.
If you have been following my posts you might remember that the first race of the series I still had 24hour legs and the second race I was getting over a bad cold. Also that race I’d been lazy with bike maintenance and had brake issues. Anyway I wanted to go into race #3 rested, ready and prepped and I did.

Once again I had a good start and dropped off the opening paved straight in 2nd place. During my pre-ride I hadn’t noticed the dust but under race conditions the dust was thicker. The course was also pretty rough/bumpy. I hesitated a little and a couple of my guys got by me . All right the race is on! I stayed with the group until that first tech section where one of the guys that I let get by me bobbled and had to dismount. In the ensuing cluster I ended up back even further in the group. It turned out to be the critical point in my race. 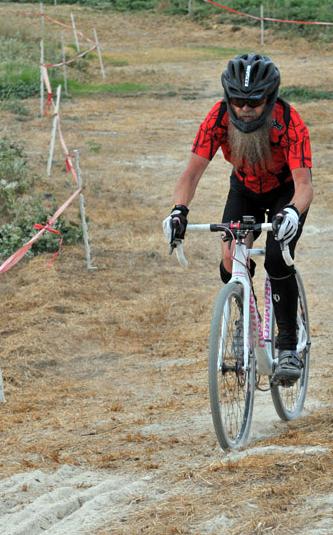 Of course I kept racing but I could only make it back up to 5th place by the end of the race. And I had no excuses. I did make a tactical error early in the first lap (should have tried to hold my spot) but that’s not an excuse that’s a mistake. I was ready. The course was ready. My Paru was ready. My Paru a.k.a. “The Bitch” ate up the course. She got me through the tech sections and the straights and she really eats up the bumpy stuff. After a bumpy race like this one there are always racers talking about how the course beat them up but not me. Anyway I’m still looking for my first CX podium of the year. I will have 2 chances this weekend as Sac CX is doing races both days. Wish me luck.

On another note I want brag a little. I just received in the mail an award from the Best Local Announcer 2012 competition for my MC work. It’s really cool to be recognized for doing something I love to do!!