The morning of day 4, I helped Katie pack up camp and rolled out by 7:30. The ride out from Cottonwood Meadow Lake was pure magic. A twisty paved mountain road, almost no pedaling. I came around one last corner and two young deer jumped up beside me and nearly ran out in front of me. The previous day was supposed to be my big mileage day, but now this day would be. Once I was back on the highway I was very quickly reminded about something someone told me. Whoever is was said I had better hope that there was no wind. I wondered why wind would be such a problem, and never really gave it much thought, until this day. I was riding straight into it. It was all I could do to manage 15 mph. On occasion I hit 18 but it didn’t last long. The tendons in my legs were screaming. I hoped that if I just dug in and kept pedaling, my legs would numb a bit, but it never happened. By the time I hit Lakeview I was spent. Katie was there waiting for me. I rested in the parking lot of the fairgrounds for nearly and hour and then continued on. 5 miles outside of town I turned to climb what would be my last summit, Warner Pass. I was already exhausted and this was a long steep climb. Katie would meet me several places along the way and I would rest as needed and rehydrate. 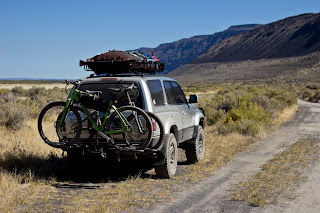 Not too long ago Peter gave me some bib shorts with padding. I thought they were ridiculous but Peter said they’d be a must, and over the weeks prior to my trip I learned to love them. He also instructed me to not wear underwear with them, so I never did. That is one reason why I wonder why I decided to on this trip, and oh was I regretting it on this day. There was a ski area that Katie and I were supposed to meet up at and I planned to be going commando after that. The problem came when Katie wasn’t there when I showed up. I couldn’t take it any longer. With no place to hide myself, I did the next logical thing. I looked for a sharp rock, reached in and began to desperately hack at my underwear. It was no use. It was like they were made of braided steel. I gave up and continued riding. Thankfully less than a mile later at a second ski area pull out, there she was. I used the 4Runner as a semi-partition and sought my relief. Unfortunately the chaffing had already set in and I could only grin and “bare” it. 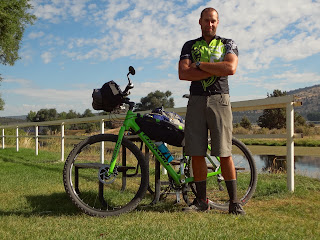 With the summit conquered, I relished a few brief moments of downhill. I say brief because once I emerged from the sheltering hill of the Warner Ski Area, I was blasted by the strongest winds yet. This time a nasty cross wind. It would blow me towards the center of the road, I fought hard to keep things under control. As I steered the Toa down the winding road, the winds alternated between head winds and cross winds. They were relentless and once I was blown into the path of an approaching RV who had to swerve to avoid me. This was suicide, I thought. I was beyond relieved when I got to the Plush cut-off road. A shortcut to the town of Plush, the cut-off road climbs atop the eastern side of Lynch Rim. It wouldn’t block any wind but the chance of encountering cars was far less probable. On top, I found my rhythm again. There was wind but at least it was only a cross wind. I rode the center line which gave me room to cope with the wind. At times it would gust and immediately drop off and I would careen off towards the roadside. Maybe I was delirious from exhaustion, but it was becoming fun, almost game like. The gusts would come, I would lean in and wait. When the gust would cut off I would see if I could recover before hitting the fog line. My spirits were up and so was my speed, 25 mph average. It wasn’t long before the town of Plush was in sight. Nestled in the Warner Valley it was the last town before the climb up Hart Mountain. It was a thrilling ride into town. 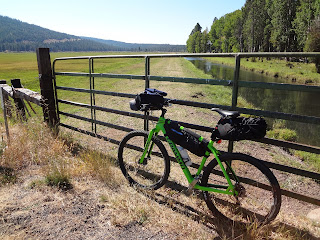 A few days earlier I would have been much more cautious, somewhat nervous if my speeds went past 30 mph for more than a minute or so. In the back of my mind I carried the “what if?” scenario. Now, with 221 miles logged on my odometer the Toa became an extension of myself. The daily ritual of riding was as normal as getting up and putting my clothes on. Gear shifts, braking force, the leans, the turns, all were as unnoticed and natural as my own breathing. I wasn’t even thinking about riding, I was only experiencing each moment. The subtlety of wind changes, the smells, the tastes and moisture content of the air. Things you don’t experience or notice in a car driving at 60 mph. 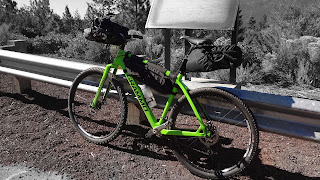 I pedaled hard even on the steepest section of downhill. Pedaling until my legs had nothing left to offer, as if I were pedaling in mid-air. I flirted with 40 mph but never broke into it. Behind me, a Jeep Cherokee was keeping a slower speed than I on these corners. I was beaming, still high from my descent I pulled into the only store/gas station around and listened to some of the locals smoke cigarettes and talk about rocks and sun stones while waited for Katie to arrive.

It was the end of my day, a hard fought day that contained the highest highs and the lowest lows. Our plan thus far was to camp at a lake at the base of the escarpment but we were disheartened to find that all minor roads were closed due to fire danger. Our only choice was to head to the top, and that meant suiting up and getting back on the bike. Enough time had passed to allow me to come down. I was done riding for the day, or so I had thought. I felt like a child who had done a half-assed job of cleaning his room, only to have to clean it again. Even though I had already changed out of my riding clothes, I once again pulled on my crusty, smelly gear, stained white from the salt of my sweat. 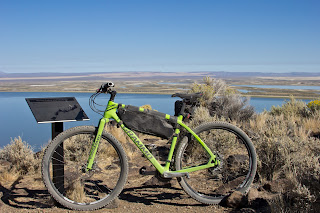 I won’t say I was suffering but the sun was baking me, and I was tired. I never intended to ride to the top this day but I didn’t have a choice. Even the minor rolling hills of the road seemed insurmountable in my demoralized state. I pedaled on, allowing Katie to pass me on this lonely stretch of desert road. I was out of gas. Mentally and physically, I was done. “Suck it up!” I tried to give myself a pep talk, but it wasn’t working. When the pavement ended and the long last stretch of gravel came, my spirit spiked, if only for a season. When the road began it’s ascent up the escarpment it was clear that recent maintenance had been done. Fresh gravel. Fresh deep gravel. I looked down at my speedometer, 3.7 mph. 2.8 mph. 0.0 mph. I could see where Katie had pulled off the road 300 yrds ahead. ” At least ride to her, then rest”. Another pep talk. Tendons burning, tires spinning out all the way, I made it to her. Peter had given us an extra set of tires, ones that would have handled this gravel better then the rear tire I was running. But with the sun setting in about an hour there was no way I would have time to change the tire and complete the last 10 or so miles, and in a way I was glad. My ass hurt, my legs were shot and I was in a foul mood. I gave Katie the sign of a hand slicing across my neck. It was done, I was done. I was throwing in the towel. Katie was trying to gently encourage me, but it wasn’t going to work. I sat discouraged in the passenger seat, feeling like a failure.

I’ve never liked team sports, and have always been drawn to individual oriented sports, like cycling. I tried soccer once in the 3rd grade but the coach always was wanting me to pass the ball forward. But I didn’t want to, I wanted to make the goal. I understand more of the team effort now, and in a way I was part of one. Peter and Lewis were teammates/coaches and my wife was a teammate. Each one doing their best to make the journey a success. I think understood that better at a sub-conscious level at that moment and that was why I was down. I was the weak link. I wasn’t a good teammate when it was time to set up camp either, and she knew why. She reasoned with me, and she was right. I did this for the adventure of it, not to achieve a distance goal. The struggle, the difficulties, both are apart of it as much as the exhilarating times, and both come to an end at different points along the way. Sure, there was team effort, but the was no adversary. The effort was only to pursue the spirit of adventure, and in that sense it was a total success. No, I didn’t finish in the way I/we intended, and maybe I didn’t finish at all. 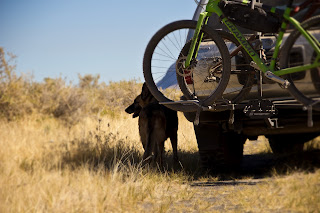 I have chosen the look at my little adventure as but a small portion of a long journey, a plot along the way, like dots on a map. When the adventurous spirit of the journey drops off, like wind to a sail, momentum halts. In the dead calm there is time to reflect, re-evaluate and wait for winds again. Maybe you’ll decide to change course, perhaps you’ll stay the course, either course or path you choose is part of a life long journey. Make it an adventurous one!

I have much gratitude for my teammates. Each of you made this possible. These kinds of sentiments are often said at the end of something important or successful, and are usually done as some type of obligatory gesture. That couldn’t be less true in this case. Whether or not the adventure was successful could be left to conjecture, but it was something important. It was important to me, and the fact that you volunteered yourselves, your time and equipment means a lot to me, and I am ever grateful.

Peter and Lewis, you are ‘Unreal’ dudes! And I am pleased to call you friends. Much gratitude for giving me gear, loaning me your GoPro and letting me ride the Toa, a brilliant bike indeed. Sorry about the scratches! 🙁

And to my wife Katie, my cheerful partner when I was in the dumps, my personal chef and masseuse. I love you. Thanks for sharing in it all with me.

And lastly but certainly never the least, my brother Kjell, who met me at my camp on the first day, which was the loneliest, and brought me beer. Part time navigator, logistics dude, I know you would have joined me in the ride if work hadn’t gotten in the way, you were with me in spirit. I love ya Bro!