I didn’t leave the campground until 8:30 the next morning. After reviewing the map given to me, I hit the bike path that traveled alongside a canal and found the start of the O.C. and E Trail, which was paved. Weaving past Saturday morning walkers and joggers, I rode 9.5 miles to the town of Olene. I was supposed meet my wife at Stevenson Park at roughly 9:30 that morning, and I was excited. She called about 9:45, she was running late, still 30 minutes from Klamath Falls and needing to get gas. I was already at the park, so I took the time I had to unload the bike of all but the necessities. Tubes, water, bike tools and some energy bars was all I would carry. Time to travel light! I wanted to make the 90 mile trip to Lakeview in one push. 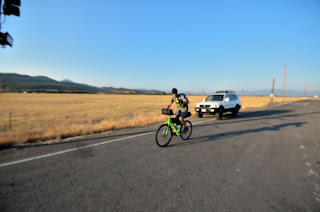 While I waited a State Trooper pulled into the gravel parking lot. “Headed for the Cycle Oregon?” he called out from his window. “Nah, I’m heading past, to Hart Mountain.” I corrected him as I approached his truck. I told him the route I intended to take, 140 on through. He shook his head. “You really need to reconsider your plan. The next 30-40 miles are busy enough, and with all the folks in trailers and RV’s headed that way to the Cycle Oregon, I would strongly advise against it. “Well, I really don’t have much of a choice.” I said, hoping he have an alternative. In fact, he did. Continue on with the O.C. and E until Bly. The only problem with that was it would take me and extra day. He wished me luck and left me with a better map, and when Katie, my wife arrived we charted our next move. The O.C. and E. has a few places to get on and off between it’s start and a town called Sprague River. I would do roughly half the trail that day, meet Katie at the Sprague River State Park near the O.C. and E. Woodline trailhead which also had a campground. We would stay there that night and the following day I would finish the trail and end up in Bly. Our reunion was short, she drove me the mile back to Olene, I hopped back on the now leaned out Toa and hit the trail which had now turned to dirt. I was all grins. Not many people were on this section of trail, but there were a few. The last person I saw was about 5 miles after the start. An elderly man and his dog. Whenever I passed by someone I would say “Hello”, and as I passed I would check my mirror to see if they had something else to say, usually indicated by them turning around. He did. I stopped, popped out my headphones and turned back towards him. “I said, are you doing that big bicycle thing there in Bly?” “Oh no. Not me. Just going past. On through to Hart Mountain.” I said. 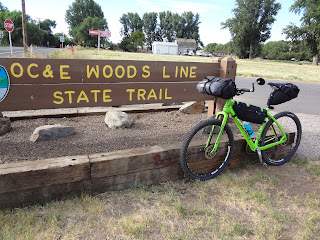 He told me that he’d never seen anyone past where we were and he walked I wanted this 10 mile section everyday. He said I should expect the trail to be overgrown and to watch for “badger holes”. I didn’t know if they were literal badger holes or if that was a nickname that he used.

The trail was in fine condition for several miles, passing through farms and ranches. There were many gates to go through, too many. So far I was halving a blast and making pretty good time, averaging about 14 mph. I came to a section where the trail crossed a paved road, though I wasn’t sure which road. Immediately the trail across the road was rough, over grown and littered with what must have been the “badger holes.” Most of the holes were hidden by vegetation and I was glad to riding a 29er, because many could not be avoided. This section was a bit slower going than before, maybe only 10 or 11mph. It was rough but it was it was worth it. To be off the main road, an adventure inside and adventure, that is what I had wanted. 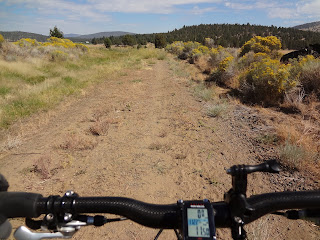 Rather than counting miles, I began to count ranches. The road smoothed out at ranch number 10, and I kicked it up to 16mph. Unnaturally tall weeds grew up all along the sides of the trail which now resembled a bonafied gravel road. Even at only 16 mph, my close proximity to the vegetation made me feel like I was in warp drive. When I hit ranch number 12, the gravel got very deep, too deep to ride at my current air pressure. I found the sweet spot and continued on at a slower pace. Only making it a mile or so, I began to struggle with the gravel again. It didn’t appear to be any deeper than before, and then I noticed my flat front tire. I spun the tire looking for a thorn or some point of puncture. Nothing. I was tired. The deep gravel wasn’t cutting my aching Achilles tendon any slack, and now the tendons behind my left knee were beginning to ache due to over compensation. I decided to pump up the tire and see how far it would get me. I got about a mile before my rear tire decided to go flat as well. Again I pumped it up to see how far it would go, the front still felt pretty good. A few miles later I was feeling that I should be getting close. The old man I had talked to warned me to be careful when I got near the Woodline Trail. “Take the road the goes up to the right. That’ll lead you to the parking lot. If you miss it, you’ll go out into the mountains and you won’t come out until Bly.” There were mile markers on the trail but there was no mileage chart on my map. All I knew was that this portion of the trail was 82 miles and it was about half of that to the Woodline trailhead. At mile 36 I started to slow down a pay closer attention. I saw roads every 2 miles or so going off to the right, and I wondered how the hell I would know which one to take. “There must be a sign.” I assured myself, and kept riding. I passed another road on the right. It was steep, rutted and rocky. I passed it, but something told me maybe I shouldn’t have. I continued on for another mile and then it dawned on me that I didn’t remove my GPS from my backpack. I pulled off the trail, dug in my pack, and found it. The road names were different from the map but using the contour of the map on my GPS against my paper map I concluded that I had gone past my exit. I flipped around and headed back to the rocky, rutted road I’d just seen. Once there, I checked my GPS again. This was my road. It was too much to ride up so I walked the 50 yrds up. At the parking lot there were signs indicating that it was indeed a O.C. and E trailhead but was mysteriously called Switchbacks not Woodline. Furthermore there was no sign of Katie. I cruised around the dirt parking lot, no sign, just me. If this was a State Park it was a crappy one, and I was having some doubts about my location. I decided to ride up a side road and check things out. I stop and check my GPS one more time and it looked like I was in the right place. Just then I heard the crunch of gravel and from around the corner came our 4Runner. Katie was as relieved as I was, perhaps more so. My tardiness and the fact that none of the road names or trail names matched our maps, had Katie questioning the same things I was. When I didn’t show up at 2:00 she got worried that she was in the wrong place and went searching out other places, when nothing else seemed right she came back and that’s when she found me on the road.

It was getting late. We both were hungry, we had no water, there was no water in the park and I had 2 flat tires to fix. We had to find another place. I loaded my bike on the back of the 4Runner and we set off to look for our digs. The assumption we had was that since we had national forest land all around us, we would have no problems finding a place to camp. That was, in point of fact, an error. There were several day use areas, and intriguing forest service roads, none of which had anything to offer us. By the time we had found a place to camp we had already driven through Bly and all the fanfare of the Cycle Oregon event.