I awoke before the sun was up on day 2 and the cold mountain air chilled me to the bone. I donned the warmest piece of clothing I had with me, an IBEX wool shirt my wife gave me for my birthday a week or so earlier. After my coffee and CLIF bar breakfast I packed up my gear and loaded the Toa. I scavenged empty campsites for small bits of wood and made a small fire to warm by before setting off. The sun was just rising as I left the campground. I stopped across the road from the entrance, the sun lit up a meadow like a field of fire. I took the moment in and was off again. I had a couple of miles of flat mellow traveling before a slight rise. Once crested, I tucked in behind the sleeping bag strapped to my bars, not so much for aerodynamics but to protect from the wind. I began my descent. I was moving down at a tick past 38 mph, the fastest I’d ever traveled on a bike yet everything seemed to be in slow motion. Cars passing are less menacing at this speed. It was a surreal moment in time, or maybe it was “Unreal”. As I hit the flat at the bottom of the hill the road turned towards the sun and in perfect synchronicity a song, unspeakably beautiful for the moment, played through my headphones. This was pure art, this was life. I pulled off the road to shed my wool layer. It felt almost like a metaphoric act of shedding a metaphysical layer, and found myself wiping away tears thinking about how incredibly fortunate I am. My wife, my daughter, my brother, my friends. The face that I get to enjoy this incredible moment while so many live only days of suffering. I AM undeserving. I was feeling gratitude at it’s purist and it was humbling. Day 2 was going to be interesting. 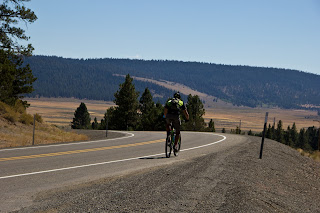 I have read the words of adventurers, wanderers and explorers. It’s always the solo trips that are as much about exploring and tapping what is within as it is discovering what is beyond. I wondered if the emotional moments that others faced would happen to me. It wasn’t like I was riding around the world, or climbing Mt. Everest. Hell, I was only going 200 or so miles, but it was or was going to be the hardest I had ever pushed myself, and maybe it is in those times that everything but our real selves gets stripped away. But I digress.

After my momentary sob fest, I pulled myself together and ticked away along the highway. After several miles I saw that the comfort zone that is called a “paved shoulder”, one thing that I had enjoyed for many miles was going away. One of the last items purchased for the trip was one that would have been overlooked by me, but was insisted upon by my wife and my brother Kjell. A mirror, this would be my protection and tool to help deal with the stress of……..the motorist. Like I stated before, road riding is not my bag. I know, “share the road”, that may be easy to say when I come upon a cyclist when driving my 5000lb SUV. Even in those times I have found situations when it is difficult to slow down in time or give a wide enough berth to pass safely, so I understand the motorist point of view. I am on their road, and while a cyclist may have certain rights, that never guarantees any kind of safety. 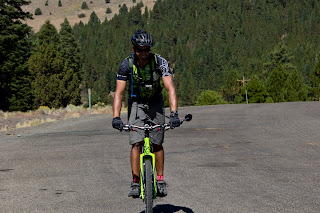 Proceeding with caution, checking my mirror every 5 seconds, that was the rhythm. When I would see a car in the mirror I would look ahead. If it was clear, I would stay the course. If I saw another car approaching the opposite direction, I would pull off the road onto the gravel shoulder. I was dismayed by the number of cars that would refuse to give me any kind of space when they could easily pass by me in the other lane, and found myself uttering aloud, “Thank you.” whenever someone gave me space. Eventually the paved shoulder returned to me along with another summit to climb. I knew that Klamath Falls and my next home for the night, the KOA, was getting near.

When planning this trip I remembered that one of the “trouble spots” was going to be around Klamath Lake. Having driven through that area many times. I remembered it’s narrowness, not much else, but a shoulder to ride on was doubtful. I enjoyed my descent from the summit, momentarily. In an instant it felt as though I was riding into a sand storm. I hardly wanted to breathe. My glasses mucked up, and my arms and face stung as I blasted through massive swarms of mosquitoes.

The 8 inches of pavement outside the white line was rapidly disappearing, traffic was heavy and fast. Checking my mirror was impossible. I was in a war zone. I ducked for cover and rode off into the gravel. It was deep, my front tire sank in and slid down the embankment into the ditch. My feet came free of the pedals and were try to pass my head and shoulders, but I held them down. I didn’t go down but it was a near miss. I brushed the bugs away, tried to clean my glasses, and assessed the situation. All the while being eaten by the hordes. There was NO WHERE to ride safely. I thought, “Some cyclist must ride this, they must!”, so I gave it another shot. Less than a minute later I was run off the road by a triple trailer Reddaway truck. My conclusion was that if cyclist do in fact ride this, they are either suicidal or stupid. I walked the ditch. My walk lasted more than 6 miles, it went beyond the lake. Perhaps I was because I was still shaken from the assaults I had taken, but I had adopted a “No shoulder, No Ride” policy. I attempted to ride the gravel but it was either too deep or too steep.

When I got the nerve to ride again, my Achilles tendon was shot from the awkward walking of the ditch. I tried my best to compensate with my left leg, and wondered how many revolutions my ankles had made this trip. Rolling into K.Falls I had no map to get to where I was going, and the verbal directions to the KOA my brother texted me must have been out dated because the didn’t match what I was seeing. But going from the memory of the map looked at on Mapquest, I found my way.

As I waited in the office of the KOA an older gentleman stood beside me and asked, “Cycle Oregon?” Totally unplanned, my trip, or part of it anyway, coincided with the famed Cycle Oregon ride, only we would be traveling in opposite directions. “No…” I responded, “Hart Mountain.” “Oh…. That’s………” He looked perplexed. “East.” I said. After chatting it up a bit he told me about an old railroad that had been converted to a multi-use trail that ran from K.Falls to Bly called the O.C. and E Trail and gave me a map, a crude one but a map none the less. Our conversation was interrupted the 50 something, spiky, pink haired KOA assistant who sold me my plot for the night and gave me the wrong codes for the bathroom/shower, pool and rec.room. We picked up our conversation again once outside. As we chatted about the bike and the trip a small crowd of about 5 others gathered and inquired, “what kind of bike is that?” Assuming they couldn’t read, I obliged “It’s a Grammo Toa.” “Is it light?” he asked as he proceeded to pick it up. “Yeah.” I informed him, “It’s carbon fiber so it’s pretty light. Although I do have all my stuff on it, so…..” “Cycle Oregon?” “No. He’s riding east…..toward Hart Mountain.” the older gentleman barked on my behalf. He looked back at me and I nodded. “Hart Mountain? Where’s that?” someone piped. Clearly they weren’t listening. My new assistant looked back at me. Again he intervened, “It’s EAST!”. Again I nodded. Good boy! 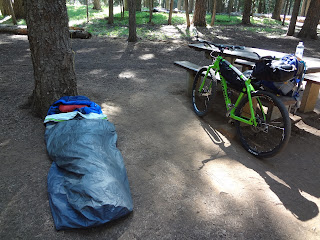 The evening was as spectacular as the KOA could muster, screaming children, obnoxious girls on their first “camping” trip in the site next to me, wannabe gangsters and meth heads walking the bike path above the campground appearing to scope out their next shopping spree. I, lacking any kind of bike lock, removed the laces from my shoes, tied the bike to the picnic table and headed for the showers. Other than the pungent odor of a skunk nearby, I slept well.