Before knew it I was kissing my wife and daughter goodbye and gave my brother a hug as he snapped some pictures. “Here goes sumthin’, I yelled as I pedaled off. Bonobo played through my iPod to set my pace. With 200lbs of me, and 35lbs of gear on top of the Toa, I expected the bike to feel heavy and burdened but it didn’t, it still felt light and nimble. In less than 45 minutes I was already 13 miles up HWY 140 and I was feeling like I could ride to Denver. 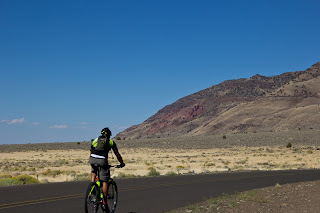 I was cruising at a steady 21 mph on the flats and kept telling myself, “Slow down, pace yourself, don’t bonk out!”, but the slowest I could go was as fast as I could. I never felt exhausted but forced myself to pull over every once in a while to take a bite of an energy bar and have a drink. 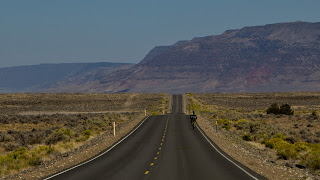 This first stretch of 140 has it’s hills, and they’re long. I fully expected to be crawling up these like a 17 year old Labrador, but I didn’t. Monitoring my computer, my average speed up most of the hills was 7.2 mph, not super fast I know, but not a snails pace either. The only time I felt the need to pull over was 23 miles up and my right Achilles tendon was singing a song due to my right foot being so flat. I rested it for 20 minutes but the pain never subsided. I didn’t rest again until I reached the summit. I pulled off the highway behind a bush, leaned against a tree and tried to stretch out my tendon but a swarm of large carpenter ants thwarted this attempt and so I moved on. I was thrilled and surprised when I saw the sign for Four Mile Lake. “No way! I’m almost there!” I dug in and arrived at Aspen Point campground at Lake of the Woods just before 2 pm. a full two and a half hours earlier than expected. What I had anticipated to be one of the hardest legs of the journey was in the bag. 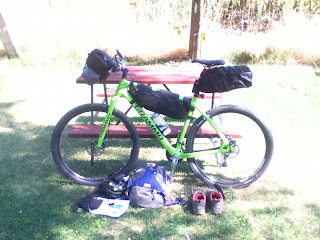