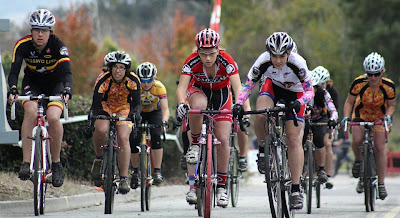 Sometimes, things go wrong. When you’re racing, you have to make a decision: do I push on or do I throw in the towel? The answer to this question has always been so clear to me.
This last weekend was Bay Area Super Prestige #4 at Coyote Point. It was the final race in the series, and I was hungry for a podium. I had a great start position; with the fourth call-up I was on the front row and set up to take the inside line on the first turn. It played out perfectly. I was on the front of the start and as we rounded the turn and headed up the hill, I was in a solid 3rd. Coming into the long sand section, I lost one place and another as I was running through the sand. I picked these two back off on the pavement section. I was catching 2nd as I hit a little rise at the very back of the course. I stood up out of the sad 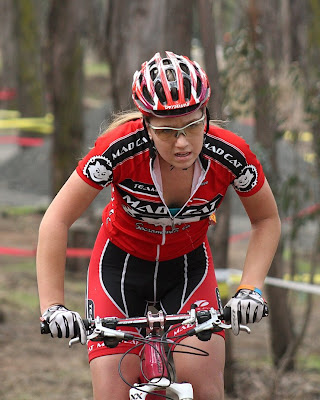 dle and snap-my bike slipped from under me and my face plowed into the grass (which, if you’re wondering, doesn’t taste too different from dirty spinach). I picked up my bike in a hurry, and to my heartbreak-my broken, wasted chain lay tangled in my spokes.
My first thought? Disbelief. No. Way.
My second thought? Anger. NO EFFING WAY!
My third thought? Sadness. No way…
I started running my bike along the side of the course, and a little chunk of my heart died as each rider passed me. I felt like crying. Cut it out, you little sissy. Time to take off those Huggies and put your big girl pants on. I kept running, and as I came into earshot of the announcers, I realized that people had stopped passing me. I was in last. I put a strong face on and forced myself to keep running.
Big girls don’t cry…
I finally reached the finish chute and saw the neutral bike pit just 50 yards ahead. I switched out my CX bike for my Grammo Toa 29er, jumped on and pedaled hard. I knew what it would take for me to get back into the race, and I forced myself to believe that it was possible. But my cross country bike wasn’t designed for cyclocross; it couldn’t get around the turns the way a CX bike can. Halfway through the course, there was still no one in sight. I was still in last.
Big girls don’t cry…
I grabbed a bottle from my dad, and hammered the flat back section. When I reached the finish, The SRAM guy had put a new chain on my CX bike and was holding it on the side of the course. I switched back and yelled thanks to 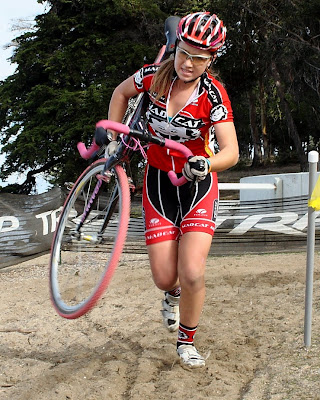 him as I rode away. I immediately felt worlds faster on the light, agile Grammo Paru cross bike. I finally started picking off riders. 1, 2, 3, 4. I wasn’t in last… but that wasn’t nearly good enough.
With one lap to go I could see the next two girls; 5, 6. I caught 5 and then 6 soon after. At the second to last turn, 7 was in sight. But I was too far back, and I finished 20 yards behind her. I was crushed, but I’d fought hard. I stopped to thank the pit guys again and then rolled off to cool down.
I finished 13th.
Big girls don’t cry…
When I picked up my cross country bike, the guy put my broken chain in a bag and gave it to me. Honestly at that moment I would have been perfectly happy throwing it at a wall and screaming some unpleasant words. But instead I’ll keep it, and it will sit in my garage as a reminder to never give up.
So, when I was faced with the decision to push on or throw in the towel, the choice was clear. Never give up. You never know just how strong you truly are until your only choice is to be strong. Failure isn’t falling down; failure is staying down.
Keep chasing….