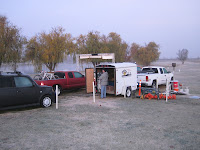 Sacramento CX Race #8 at Laguna del Sol. Last one! http://www.lagunadelsol.com/ LdS is a clothing optional resort in Wilton. Sac CX raced there last year and we are back to race and to have the end of the season awards party. As has been the pattern Asa has gone to the venue to do course set up Friday morning and I show up Friday evening after my day job. This time we have a room in the  hotel right on the course, sweet! Not long after I arrive, Gene of TimeYourRace.com shows up with Thai food for the crew. We chow down, hit the hot tub then off to bed.

We get up at o’dark 30 to finish setting up timing, reg and the P.A. It’s cold (or at least California cold). I put down my sports drink and when I get back to it there is a layer of ice on top. Brrrrrrrrrrrr. I made the mistake of leaving my Paru in the back of my truck. (Asa is going to want it back. But today it’s still mine. I may not give it back.)

We get set up and open reg. Wyatt is home so Frank gets the mic while I do my warm up. 9:30 rolls right around and it’s race time! It’s been a hard week at work and on the bike. My legs were not up for the plan my coach had laid out. This whole deal is an accidental quest remember. My year long plan originally had me taking a break in September; I was supposed to be in a build phase after a break in October. We changed that plan when I got into this quest. My legs had just had enough. My coach, Mistress H, nielson.heather@yahoo.com, had been having me do CX workouts and this last week I just could not do ’em. So coach that she is, she built me a rest and sustain plan to get me to this last race with as much go as possible. 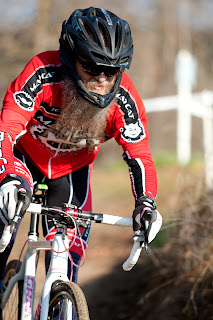 It is the usual cast of characters on the Men’s C 55+ start line. We are off. I have my usual trouble with the only set of barriers and get behind. Lap 2 Richard is out front and I decide to try to just hang off his wheel and see how it goes. When we get to the finish line the lap card says 2 to go. I’m trying to figure out a plan of attack as we roll thru the first part of lap 2. But we aren’t too far into the lap when I hear the “1 to go” announcement. So if we get caught this will be the last lap. I decide to make my move at a set of corners that seem to bother Richard. I’m going to jump just before the corners and see if  I can hold on until the end. I do and it works but we are too fast and don’t get lapped. (The rest of the C55+ers do get lapped.) Now I need to hold on for another lap. I give it all I have and it’s just enough. I don’t drop Richard but he can’t catch me either. Yay! Another win gets me the “perfect 300” score I was after. So in a best 6 of 8 series I had 6 firsts. I’m really stoked! But my work and day are not yet done. 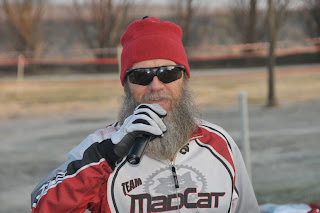 I go back to my announcing chores and the podium awards. We are at a clothing optional resort and we have decided to end the series with a naked race. Helmets required, shoes and gloves optional. I’ve been talking up the “balls out” race all day. Both to warn those folks who have N.S.S. (naked sensitivity syndrome) and to get the racers into it. Endouro Bearings, Jagwire and Unreal Cycles have donated prizes that will go to the first man and woman across the finish line. The morning ice is long gone, the sun is out and at 3:00 there are 13 hardy souls on the line and I’m one of them. I don’t have the legs or skills to win but I just had to give a go. I mean it’s not everyday you can race naked. It turned out the residents of LdS knew about the naked race and they lined part of the course in the uniform of the moment and cheered, heartily for the racers. Way Cool! (They had been mostly discrete thru out the rest of the day.) 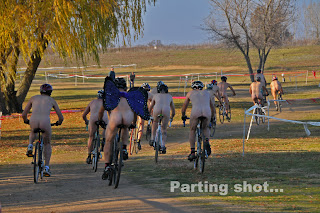 Next up for me was the series awards ceremony at the club house. We did the series podium for all 18 classes and had a raffle where everyone took something home. Great day and great series. It wasn’t until I was unwinding in the hot tub that it all started to sink in. First place in a series! I’ve never done that before. First season of announcing and just as crazy my first naked race. Wow first in a series. I’m still smiling. Thank you for wishing me luck.