Whoever said that love at first sight doesn’t exist is probably right. Love at first ride, however, is a different story. Now, now! Don’t be dirty; I’m talking about a bicycle.

I first laid eyes on the pink C3 when I saw Asa’s and Avery’s bikes at a local criterium. Was I jealous? Yes. Did I want one? Uh, yeah! Pink and black are my favorite colors, but I wasn’t on the market for a bike just yet. Later on, I decided that I needed an upgrade and after several different rides on many different bikes and plenty of heartbreak, Avery’s mom, Kris, offered to let me ride and race Avery’s bike. 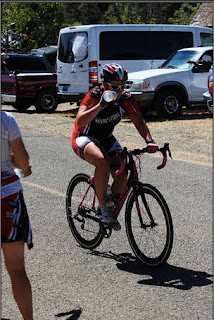 Since I obviously didn’t decline the offer, I rode it a few times and then took it to the Winters Road Race in, you guessed it, Winters, CA. Avery’s a bit taller (okay, okay… so I’m short!) so the bike was a bit too big for me, but it had a great feel to it and it was light. The uphill was fine (though she has a standard crank on it and I usually ride a compact. Found that out on the up – whoops!), the handling was amazing, and the descent was even easier.
I was sold. 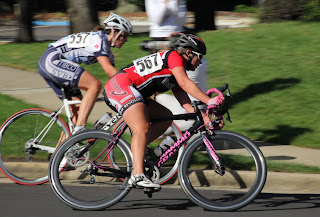 A couple of weeks later, Kris gave me the okay to ride the bike at the Folsom Cyclebration Criterium. Once again, the bike was too big and I definitely felt it after being in the drops for 40 minutes, but the handling, cornering, and speed surges were no problem on it.
Actually, the cornering was amazing.  (I know, the stem is too high. The whole bike was too high!)
I also took the bike to Sac State to attract more people to join our cycling club. It worked. People loved it, others couldn’t stop from touching it, some drooled over it, and many asked questions.
Very importantly, as a 24-year old college student, I have to say, awesome dude magnet.
Did I mention I was sold?
So, I did the natural thing and called Peter and ordered a bike. As far as components I got full Sram Force and a compact crank. Pink brakes, pink skewers. Pink, pink, pink! I just need to get a pink/black saddle and
I’ll be golden! I didn’t get the awesome wheels that Avery’s bike has because I want those to be my carrot for when I get enough points for a category upgrade. Hey, gotta have something, right? 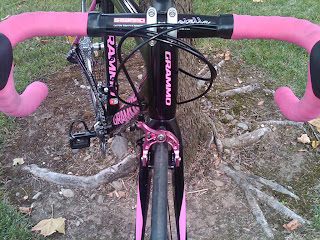 After [im]patiently waiting for my bike to arrive, taking it out of the box, and jumping like a little school girl, I took it to Asa’s and she built it for me because, as we all know, she’s awesome. Once I got the message that it was done, I once again jumped like a school girl while smiling like a fool and went to pick it up. Got a quick fit and off I was. I got a new toy! 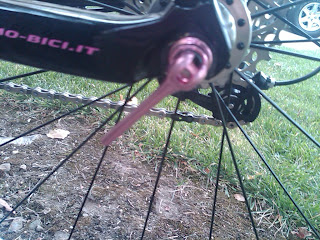 I’m looking forward to the race season. I’ll be racing collegiate again, and, as far as I know, I’ll be the only one on a Grammo out there. Not only on a Grammo, but on an awesome pink and black Grammo! On a frame that’s just my size, too. This is my very first nice race bike. I predict that there will be some hurt being thrown out there. 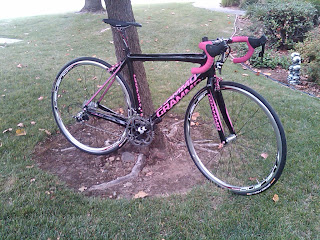 I was wrong… Love at first sight exists.