Wow, so a few weeks ago I was out on one of my first bike rides back since my injury. Ben and I decided to climb up Green Springs (mind you he had rode his bike from his house to mine which is 27 miles) and cut over to Dead Indian then home. It was suppose to be a semi fast 3 hour ride because I had to work at 11:00 a.m. As we began making are way up Green Springs we realize we were apart of some sort of group ride as we are among 50 to 100+ riders. It was neat to see so many people out riding, I normally see ten at the most on any given ride. We found out it was the local Tour of the Lakes ride and people were doing either a 56, 100, or 136 miler. The route we were going was the 56 miler. I couldn’t believe Ben was on his TOA mountain bike with a front fork, he made Green Springs look like a fast flat. It was cool to see him pass people and then watch their expressions . . . “no… no he’s not on a mountain bike” . . .

At the summit of the first climb we turned left. The climb felt ok I was just excited to be out on my bike. When we took the turn we had more climbing, on this section is was just massive rollers, one after another all the way until Dead Indian. Once we hit Dead Indian I was pretty tired and couldn’t wait to hit the summit so I could enjoy the 8+ mile downhill to finish the ride.
Finally the summit, nothing but ripping downhill to follow, maybe. I made it to the first huge 180 turn and I flatted on the front tire. I’m guessing I was going 20+ miles an hour. I consider myself extremely lucky. I was on the brakes because of the turn coming up. If I had been anywhere else it would have most likely ended bad. I changed the tube and started down again, a little gun shy and made it 100 yards and POW another flat on the front. After inspecting the tire we realized I had a small blow out and with only one tube left we had to be creative. By this point I was late for work and needed to get down the mountain and of course no cell reception. Ben had an old GU packet and he placed it between the tube and tire. 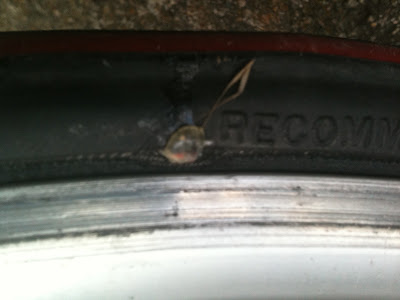 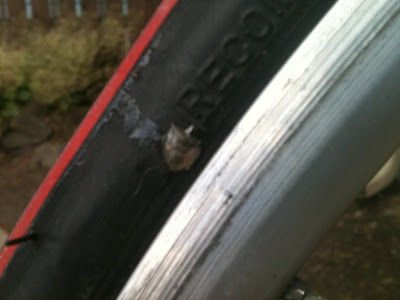 Now I was extremely gun shy, I couldn’t take my eyes of the front tire on the way down, I was just waiting for it to let loose at any moment. Needless to say I took it extremely slow the rest of the way down. 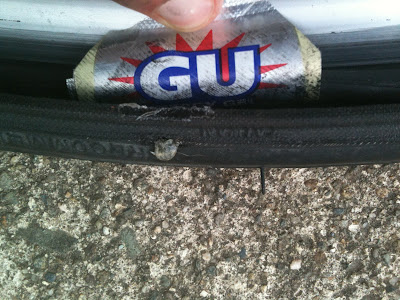 It wasn’t my fastest decent of Dead Indian but I made it down. I thought it was funny the pressure pushed any remaining GU out of the packet. I ended up being an hour late to work but lucky for me I had a witness. As I walked in a customer said “Were you just flatted out on Dead Indian, we came from Klamath and saw you changing tubes on the side of the road” and I gave them the short version of the story.