When you’re in a Criterium, there are spectators all over the course. Every turn, every straightaway, and especially the finishing stretch. It’s the job of the racers to give them something to watch. 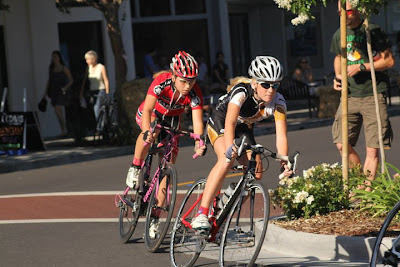 In many of the bigger categories, a breakaway does the job pretty well. But when you’re in a junior race of less than 30 riders, that isn’t always the case. Granted, juniors are probably pretty fun to watch in general, I thought it would be entertaining to try to stay up with the boys at the Davis 4th of July Crit.
The girls 14 and under field had 7 riders, and the boys had around 15. I don’t know what some of those 14 and under boys are eating (I’m thinking whole cows), but a few of them were just plain huge.

Once I passed the junior rollout, I was able to get up into the front of the start line. After a crazy start, 3 of the boys got out ahead, and I was in the second group with one boy and one other girl. I get all paranoid and worked up over strategizing, so me and my inexperienced crit racer self took the lead and hammered away, just to see if they could hold on. 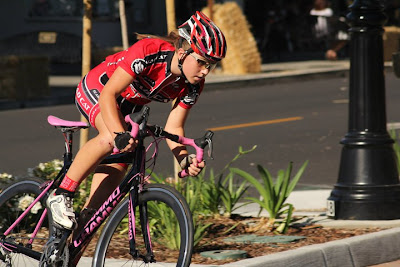 After 3 laps, they were both still there, so after one last surge to try and get away, I pulled up and let the others lead. I sat back there most of the middle of the race, only taking the lead for one lap. On the last lap, the other girl and I had left the guy, and I latched on to her wheel. I was jittery and unstable, preparing for the sprint as we rounded the last two turns.

She braked and took the final turn wide, so I accelerated and took the inside of the turn, just as she shot across and slammed the door on me.
That pretty much killed my sprint, but I chased her anyway. I was making up time, but the finishing line came too soon, and I finished a few yards behind. 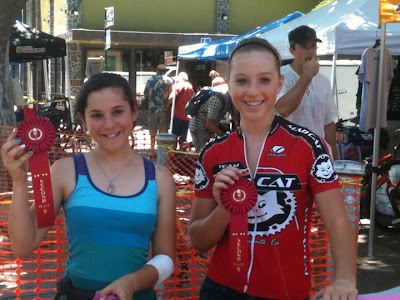 I was 2nd girl and 5th overall.

Later, Asa (my team manager) just laughed and said, “Patience, child. You’ll get the hang of it. Watch the older racers; see what they do.”

I spent the rest of the day watching the races with my friend Aliya Traficante, who has a lot more road racing experience than I do. I learned a lot from her just by watching her race the women’s 3/4 race, and how she maneuvered. As I watched, I experienced many ‘LIGHT BULB’ and ‘Oh…Duh’ moments as I realized how many obvious mistakes I’d made.

It was a great experience, and at the end of the day I had fun. I learned a lot, but I still have a lot to learn about criterium racing.

One thought on “Monkey See Monkey Do”