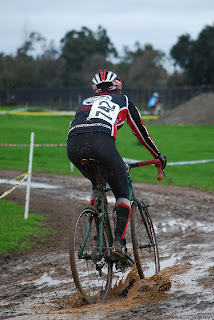 This season started out sooooo right! My bikes were fresh, my attitude was positive, I even hired a coach! And for the first time in ages I didn’t gain 10 pounds over the winter – no land animal protein makes it way easier. The first month or so of coaching was rough, since I was still putting on Sacramento Cyclocross races on the weekends which made getting my miles in tough, but I had high hopes for Spring… a Spring that never came. The rain just went on and on. The stationary trainer miles went up and up. Races were cancelled and my attitude became as gloomy as the view out my window. The races that I did get to start, I was not ready for, and my poor results had my mind circling the bowl. 4 races cancelled, 2 DNF mechanicals, 1 DNF brain mechanical and all the while, Peter and Lewis bugging me for blog entries, but I hate writing about negative stuff, I did not want my blog to be about “poor me, poor me :-(” but that was all I had been feeling. So what does one write about when everything has gone wrong? 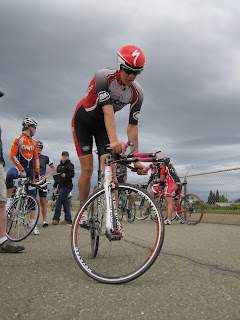 For weeks I hacked at my brain digging to uncover the positive that I just couldn’t see. There had to be something. And then the “duh” moment hit me. So, last year I lost a stage race because I had no clue how to time trial. I didn’t have the bike, the experience or the glutes to hold on to my first place at last year’s Chico Stage Race, and this year, I had the equipment, but the fitness just wasn’t there. So I figured it was about time to change all that. Unreal provided the bike, so I had to learn how to use it. For a couple of years I had heard about the South Canal Time Trial, put on by Folsom Bike. This informal, free 10 mile TT takes place every Tuesday night from March through September, and is only 13 miles away from my house. Perfect. When I rolled out to my first one, I had only two time trials under my skin suit, and I had placed miserably at both. Time Trails are commonly referred to as the Race of Truth, for obvious reasons, and the truth was that I sucked. My first attempt at the South Canal Time Trial, I was just about at the bottom of the heap. I think I beat a 10 year old kid. My time was 28.36, barely a 21 mph average. But I came back the next week, and the week after, and so on… As of the middle of June, I reached a personal best of 26.28 with an average of 22.7 mph, that is over 2 minutes off my time. By the end of the season, I hope to post regular sub 26 minute times, which will most definitely put me in the running at Chico next year. 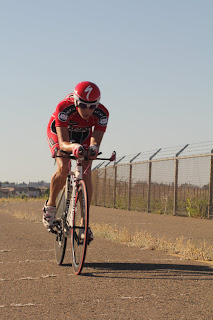 So yes, there is some positive stuff happening with my cycling this season, I guess it was just hard to see underneath all the frustration from the poor weather, cancelled races and mechanicals that have plagued my Spring. Now that the weather has turned, I am hopeful that my racing will improve and I will get to utilize my new-found power at some “official” races. My next race is the Davis 4th of July Criterium, which is a BIG event. Performing well in Davis will surely lift my spirits and hopefully stoke this damp, fizzling fire that has been my racing season this Spring. Downieville is coming, gotta find the fire.