There is no doubt that the past months and 4 days has been a little more difficult than first expected. Prior May 17th training was going as scheduled. I had a few not so great races but no major set backs. As of recently I have really fallen off the wagon. Its mostly lack of motivation on my part, I am still able to get out and train (not on the bike yet, that’s soon to come). However I have placed myself in a rut that I wasn’t to sure I was going to get out of, until just a few hours ago. Sure I’ve put together a few good days in a row but I was yet to have a work out that motivated me to the level I was at before the crash. 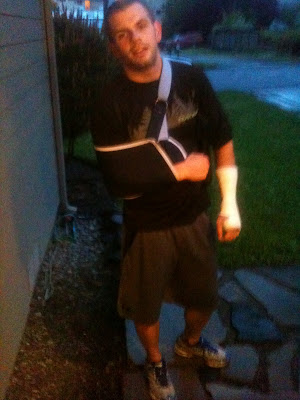 Before I go any further I have to give credit to my friend Jace who is an extremely strong runner for snapping me out of my funk. Through this low I have learned a bit about myself and most importantly, I am not a fun person to be around if the endorphin’s aren’t flowing and I really enjoy sleep if I’m not training. I’ve become extremely unmotivated until today. On the schedule I had a run where I wanted to go out for an hour and a half. The second half of the run was suppose to be faster than the first and at no point in the run was I suppose to hit race pace. Well after work I was actually looking forward to the run and on my way home I got a text from Jace who I hadn’t talked to in a few weeks asking if I wanted to run with him. I took it as a sign and gave myself no time to think about the fact that I was going to run with him and texted him right back “see you at 6:00”. A little bit about “him” he recently finished 3rd in an ultra run out in Sisters Oregon where for 48 miles he averaged 6:45 minute miles with a decent amount of elevation gain. Hence the quick thoughtless response. I had a route in mind and told him I partially wanted to treat it as a training run and he had no problem with that.

At 6 o’clock we were off. I am going to spare you all the details of the run and just insert the information but I will tell you this, I have never doubted myself, my training or my future racing plans more than I did today on this run. That was until we crested and I knew it was pretty much level to all downhill the rest of the way. At this point I was ready to go and got a second wind. When we finished the run I had a sense of accomplishment and a feeling of being back on track. So despite the delay which took all of one month and 4 days I would like to think that I am ready to get on with the training and self punishment. This low is over . . .