According to my dad, sometimes I “get caught up” in the moment of things. These things include cycling. I sometimes….okay, a lot of times… have so much fun on my bike that I forget to brake and consequently over-brake at the worst of times…and, pay attention. I’m also, admittedly, a teensy bit of a showoff. (Teensy bit)
So, at the Prairie City Race Series on Wednesday night, I was thrilled to see that the course included an ATV track…with jumps. At the start of my race, the Sport Women 34 and Under, I pushed off the start to insure a clear shot at those jumps. There were a couple photographers taking photos of racers, so I just had to jump a bit higher than planned. 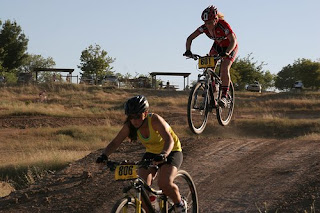 Just a bit. I took the jump, and let me tell you, I flew. Later I was told that I got almost three feet of air. My response? “No way!!! RAD! Did you get it on film?” My mom’s response when she saw the photos? “A little less air time please, Ninja Princess.”
I stuck the landing perfectly, and I was in perfect position right behind 1st place. The course hit a steep, rutted downhill that I totally railed. The descent wasn’t the issue. It was the slippery dirt at the bottom that threw my rear wheel into a rut. I washed out through the corner, landing hard on my right side. I heard someone yell, and blinked. When I opened my eyes, there was a guy standing there, pulling my cleats out of the ped 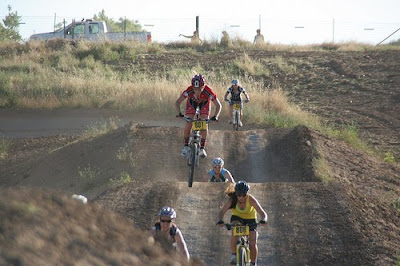 als. He looked at me. “Wow, kid. You were out for at least 10 seconds. You alright?” Confused, I squinted up at him and said, “Um, yeah. I think so.” A woman was there, too, rolling my bike off to the side. She asked what happened. Still a little out of whack, I said, “Uh, well, I just kind of washed out, I guess.” I didn’t remember blacking out, but they both assured me I’d been knocked out in the crash. The guy showed me a hole in my number plate and my handlebars, which had been bent crooked in the crash (the carbon bars were fine; he straightened them out for me).
The roving EMTs arrived in their buggy a few minutes later. The guy who’d helped me to sit up explained that he was a paramedic and he’d seen me crash and told them I’d been out for a few seconds. Renee, a local EMT who knew me by name (Ergo, I get hurt a lot) asked me a few questions to the tune of my name, age, team, and the approximate time of 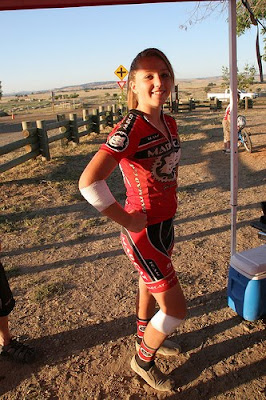 day. I answered pretty well and said, “I’m feeling better. Can I try to finish?” (Random Monty Python moment: “I’m not dead yet! I’m feeling better”!) Renee laughed, showing me a crack in the back of my helmet. “Nope, you’re done. You banged yourself up good this time.” Tom, the EMT’s assistant, whom I also know well, examined the damage on my right arm and knee. “Well, you got some good road rash on your arm.” I hadn’t even noticed that yet. “Oh. It doesn’t hurt.” Laughing, they told me, “Oh, it will hurt.” I also had a deep cut on my right knee. I groaned, seeing I’d gotten blood and dirt on my new kit and socks. They let me ride back to the pit, but I was extremely bummed that I had to quit. My dad and a few others came rushing to the med tent where I was getting cleaned up, and every time, I said, “I’m okay, I’m okay” I actually looked pretty badass in a dirt-covered kit and my white bandages made me look super tan. My helmet was ruined. So were my chances of winning the points series for the 34 and under Sport women.
The next day, I woke up so sore it hurt to move. Besides the worst injuries on my right arm and knee, I found more cuts, scrapes and bruises on my right hip, right shoulder, left arm and some worse bruising in my right ribcage. People asked me what hurt worst. My answer? Everything.
Keep Chasing….
Crash and Burn