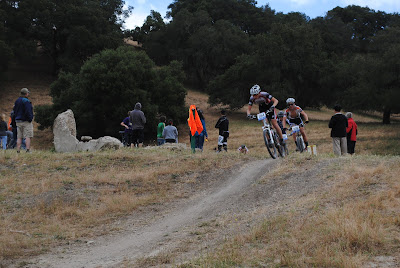 Hey all! Last weekend was the California High School State Championship race in Los Olivos, California, my final high school race as JV. We packed up and hit the 6 hour drive on Friday. It was a brutally long drive, and we had no stops! We didn’t arrive at our hotel in Santa Maria until 2 A.M.!
After a nice long sleep, we drove to the venue for pre-ride and pit-zone set up. It was a great day for riding, partly cloudy, but not too hot. Avery and I pre-rode with a bunch of our high school friends. Honestly, I was very unimpressed with the 5.3 mile race course on my one lap pre-ride. The course started with some flats, a creek crossing, and cow trail. Then you hi 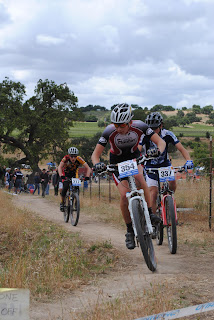 t a super steep switch back hill, which was followed by a semi-steep descent with off camber turns. At the bottom of the hill, we took a slightly rolling fire road to a steep fire road climb which turned into a rolling cow trail along the top of a line of trees. After this was a descent into a long flat cow trail to a stream crossing, and then it was only a short chicane to the finish line. JV raced 3 laps. The course seemed to have too little passing space, and the washboard cow trails suck up all your momentum. However, I also know that there are many courses that are no fun at pre-ride speed, but are awesome for racing. I am glad to say that this was one of those courses for me!
We had a nice dinner on Saturday night, and I got to sleep as soon as possible. When I woke up in the morning, it was my favorite racing weather, slightly chill when you weren’t riding, with light clouds and brief rain showers. I was #12 call up to the start line of JV D2, because even though I was #5 for the NorCal series and should theoretically have 9th or 10th call up, SoCal had putting their Independent riders in their D1 class because they had too many riders in D2. However, they moved them back to D2 for state, and 2 SoCal Independents had more 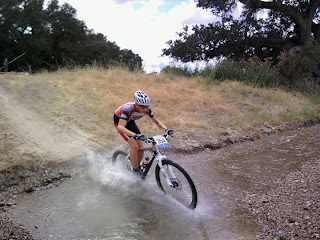 points than me. This start was a little different for me; I have had a frontline call up the entire season. Twelfth call up put me third row for this one.
I was happy that we had a neutral rolling start so I could get up closer to the leaders before the start. As soon as we started rolling, everyone was jockeying for positions closer to the front. Then the lead out pulled off, and it was game on! I almost got taken out as we hit the single track when another rider hit my handlebars hard, and then I was in a long pace line as the entire field hit single-track. I wasn’t where I wanted to 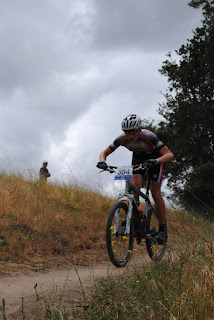 be speed wise, or compared to the leaders, so I immediately started passing to get closer to the leaders, even as they pulled away. The lead group, I can’t remember how many it was, had a small gap on the field, and there was another group a little ahead of mine. I dropped my chain on the first corner of the descent, and had to do a flying dismount and shift and crank the pedal to get it back on, CX style. Only one rider got around me, and then I was back on the gas. We stayed in that position during the switch back descent. When we hit the fire road, I had a chance to check who was around me. Our little pack consisted of 6 guys. There were 2 guys from SoCal, Austin Gooder, and my good friends Parker Eide, Mitch Stockwell, and me. Mitch and Parker took the lead for a little bit on the fire road, but I jumped around them when we hit the climb, and then we all rode the top of the ridge line. I got a small gap on the descent, the flats, and then everyone caught up going through the creek c 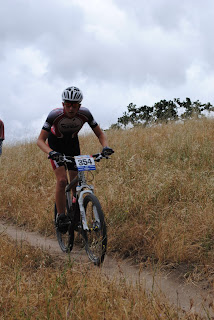 rossing, and I led our pack through start/finish.
After we went through the feed zone, Mitch and Parker dropped off the back with one of the SoCal guys. Austin and I were together, and the SoCal rider that hadn’t dropped off the back had a tiny gap on us. Austin was right on my wheel, and he said, “Just like Sea Otter man!” So I said, “Alright man let’s go. Your turn to pull.” And then we pulled around the SoCal guy. We hit the major hill and hammered up it up, and I jumped around Austin to pull on one of the corners. Sofia Hamilton and a bunch of Varsity girls were on 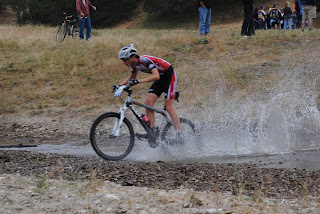 the hill cheering us on. I also got some compliments on my race skin suit. 🙂 Austin & I took turns pulling through lap two and into lap three.
We had a great system of teamwork going, and I wanted to keep it going into the next lap, because we had some speed. My legs were holding up really well, too. We still had the SoCal guy on the back, but he wouldn’t pull. He just tried to get in front for the descents, and we usually didn’t let him. We used the same strategy burning up trail until we came around two SoCal guys on the fire road hill. I took the lead, and made a small gap on the hill and the cow trail after. They caught up on the descent 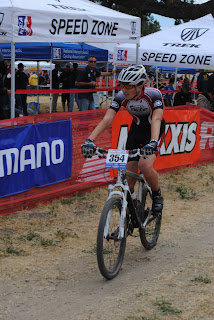 and one of the SoCal guys shoved his way around for the pass. But when we hit the flats, I turned it on. I came around the SoCal guy, I put my head down and laid out all the power I had and sped through the creek crossing. I heard my dad cheering me on, and the Marin Catholic coach (Austin’s head coach) hollering at him to catch me. I let out everything I had left, railing the hard turns on the grass as fast as I dared, and then there was the straight to the finish line. I had no way to know how close Austin was, so I dug deep and fired off with a final burst of speed and crossed the finish line. Only then did I look back, and I was happy to see that I had a small gap on him.
I ended up 12th out of 58 riders in JV D2, qualifying me for Nationals for the second time this season. I am very happy with my finish, as we have a brutally fast field. I had an awesome, fun, tough race, and I am proud of it. This was my final race as JV, since I am qualified for Varsity, and I will race Varsity for my Junior and Senior years. I’m racing the Weaverville 6 hour on S 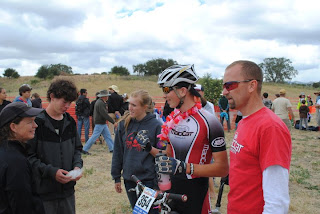 aturday; I hope to see you there! I’ll keep you posted.
P.S. Heres a link pics of the weekends racing!http://fancyshpants.smugmug.com/Cycling/In-The-Aeroplane-Over-The-Race
Look Out Varsity, Here Comes Grammo!