Saturday, May 7, was the Rockhopper Classic in Vacaville, CA. It was last run in 1997, which also happens to be the year I was born. It was revived this year, and I entered in the Junior 18 and under division. My class did 1 lap on a 10 mile course. I was prepared for a hammer fest on such a short course. I wasn’t able to join any of the pre-rides on this course the weeks before…disadvantage.

I stayed the night before the race with teammate Kim Alvarez so I could get as much sleep as possible. I got up at 6:30 AM and Kim and I were off to get breakfast. I had a sausage and egg sandwich and white mocha at Starbucks (breakfast of champions). The drive was easy and before I knew it, we were driving into the venue. The wind was visible even in the car, as the pond’s water blew all ov 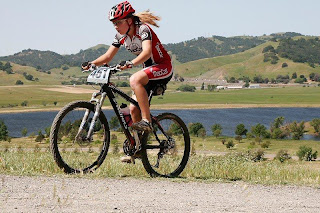 I chatted with Team Whole Athlete racers Sofia Hamilton and Josie Nordrum before the race. They were racing in the Open Junior female division, doing 2 laps. There were only two other girls in my division, one was older than me and the other younger.

I got off to a quick start, staying with a group of junior guys through the first few rollers. At the first downhill, the pack was broken up. It was a rather short downhill but it was very steep and dusty. The dust got kicked up in your face and it was difficult to see. If you were lucky enough to ride it after the dust settled, you would slide across the poufy, light dust like it was ice.

At the next turn there was a group of spectators. Off to the side of the trails was a small tabletop jump with spray painted words on it: “Steeze Jump” and an upwards arrow. I had heard about this “Steeze Jump” prior to the race and thought I might give it a try. The 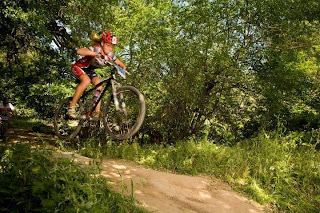 re was a photographer standing behind it, in position to take pictures. A man waved to it and called, “Jump it!” It didn’t look dangerous, so I took it. I launched about 3 feet into the air and a sharp flash of a camera made me blink a few times as I landed on the other side. The man laughed and yelled, “Yeah! Go kid on the hardtail!”

I hit another steep climb and at the top there was a breathtaking view of the countryside. The course dropped into another descent, this one even steeper, bumpier, and dustier than the first. The trail went into another climb, and then a long fire road section of moderate climbing. My odometer read 5 miles, roughly halfway through the race. Sure enough, there was a few volunteers handing out water and sports drink at the feed station. Afterwards, the trail went up into a steep section of uphill switchbacks. This was the most traffic I had seen in the race, and it was tough passing riders on such a steep slope. I hit another fire road climb, and then a short flat that head into another section of uphill switchbacks. At the top, I shifted up and started pedaling harder. With a rough ‘chush!’ my chain dropped. Letting out a string of unpleasant language under my breath (sorry mom and dad), I hopped off and looked down, expecting a normal chain drop. However, I noticed my chain was behind the cassette, snagged in my spokes. Oh, yippee.

I tried multiple ways of un-snagging my chain to no avail. Finally, I was able to get my chain off the spokes by pulling it around as I rotated the wheel backwards. In all I’d given up a minute and a half of precious time and I now had to re-pass many riders who I’d already passed. Ugh!
After another set of uphill switchbacks, I got to a short gravel road flat before the trail dropped into a downhill-finally! There were some fun downhill switchbacks, and then the trail led across the hillside, into the trees, and over a rocky section. The trail led around another bend and I could see the start/finish area, but I saw the way the trail led. There was still a mile yet to the finish. It was a fun section of downhill. I passed a few more riders before the finishing stretch, which was a big loop around a grassy field. I crossed the finish line none too soon, and I was relieved the brutal race was over. I won by a 36 minute gap.

A few minutes after I finished, my allergies went berserk. My nose clogged up, my left eye itched like none other, and my right eye was watering like a faucet. Thankfully my nasty allergy attack waited to kick in after I finished. Kim and I passed off bottles to a few Mad Cats who were brave enough to tough out 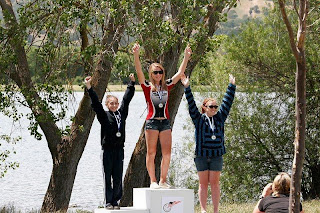 3 laps, and I wolfed down the complementary post-race burritos.
By the time awards came, I was utterly miserable from my allergies, dark sunglasses concealing my helplessly swollen, red and runny eyes. I was so happy to have a full podium, and lots of people cheering.

I was wiped out on the drive home, but when we got to Kim’s house I couldn’t resist jumping in the pool with Kim’s sons, Aidan (8) and Elias (6). For the next three hours we were swimming, and I’m sure I threw the boys into the pool at least 20 times each and cannonballed at least 30 times. My day was finished with a great sushi dinner at Sushi Unlimited with my family, Asa Salas, and George Dunkum.

4 days after the Rockhopper race we got an email announcing that I had won the Steeze Jump photo contest! I was dubbed the “Steeziest girl of the day!” I’ll receive a framed photo of the jump and a brand new full face carbon helmet. That was just icing on the cake.

It was a super-fun action-packed weekend and I had a blast. I can’t wait to do a race like this on my Grammo 29’er when it’s ready!
Keep chasing…

One thought on “Climbs, Coughs, and Steeze!”