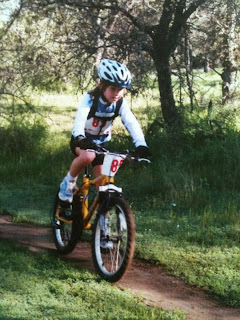 It all started when I was five. As I watched my older brother Wyatt, seven at the time, zip around the local trails on his bike, I thought “I want to do that too.”
So, on my tiny little Kona Makenna, I began pedaling… The next year my parents saw that a local racing company called Total Body Fitness (TBF Racing) was holding a little race for juniors on the lake trails I’d been riding for fun. So, Wyatt and I raced the 5 mile course in the freezing cold and sloppy mud, and I was hooked by mile 1. I loved the thrill of competing, and, even more so, the 3rd place plaque I took home with me. For the next 4 years or so, I kept upgrading bikes and racing little local races, triathlons and duathlons.
Then, at roughly age 10, I decided I wanted to start really racing. I was racing with a local shop team, and I 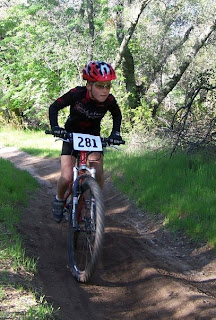 wanted to race bigger events, with bigger fields. So, my parents took me to Sea Otter Classic, and entered me in the Cat 3 18 and under division. It was the hardest thing I’d ever done in my life, but I had a blast racing against girls 4-7 years older than me. Afterwards, as we left, our friend called my dad, frantic. This was the jist of the phone call: “Where are you guys? The announcer is calling up Avery to the podium to get her medal! She got FIFTH!” I was so shocked and stunned that I’d made the podium, and even worse, missed it. How great it would’ve felt to stand up there with those big girls, little bitty me, racing with the teenagers!
I continued racing locally, slowly making a name for myself in the Sacramento area. The next year at Sea Otter, they had created a 12 and under division and also a 13-14 division (probably on my account). I was pulled by the EMT’s at feed zone because of the asthma-related breathing problems I was having. That bummed me out pretty badly, but it just made me hungry for a win next year. I hammered away at training all year, and I was on a new shop team, Team Mad Cat, and I’d planned my entire season around Sea Otter. That year, my 3 main rivals were all racing in my division, and I was pumped like none other.
I ran away from the group around mile 5, and led the race until the 3 sisters climbs. At the top of the 3rd sister, the 2nd place girl came up next to me. I flipped, my mind screaming, “NOOOO!!!! How did this happen?! I WILL NOT FAIL!!!! AHHHH!!!!!!” I clicked into the biggest gear I could push and redlined it to the end of the single track, onto the Mazda racetrack. Crossing the finish line, I almost collapsed with tiredness and relief. I turned around, expecting to see 2nd place finishing as well. She hadn’t even hit the track yet. I turned to my dad, who was outside the finish chute. “Where is she?” I asked. “Who? 2nd place? You got a good minute and twenty on her.” 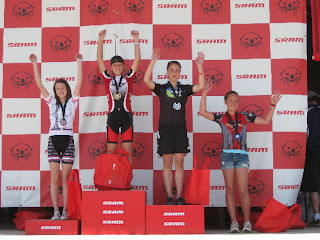 Wow. The feeling of standing on the top of the podium, crowd cheering, gold medal hanging from my neck, was the most amazing thing I’d ever experienced. I was proud, and so happy. That was the moment I knew that this was what I was born to do. I was born to race bikes.
Now, at age 13, I’m racing cross-country, road, cyclocross, and I even dabble in downhill. Pretty much my entire life is school, family, and bikes, bikes, bikes. And I’m always chasing. Chasing racers, chasing the clock, and chasing dreams.

4 thoughts on “The Chase”