When I woke up l 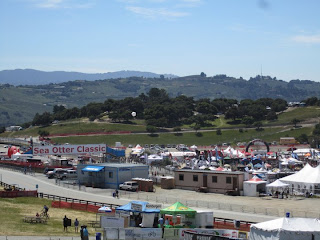 ast Sunday morning, a cold fog clung to Monterey. When we arrived at the deserted Sea Otter venue, I rolled through the ghostly mist, in between silent booths. It had an almost surreal effect, the venue that I have always seen bustling with people in the bright sunshine, deathly quiet under a grey blanket of silver vapor. I rolled up to the NorCal high school booth where I was going to warm up just as the truck with trainers pulled in. As soon as I had a trainer, I got on and plugged into my iPod to get in race mode. I got to watch most of the mist burn off as I warmed up, and then it was off to the start line of my 20 mile Cat 2 race. I was in the 3rd or 4th row for the start, not perfect start position, b 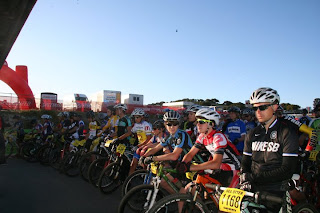 ut there are large amounts of road and fire road, aka passing/drafting space, for the first few miles of the race. Therefore, I opted for more warm up time rather than primo starting spot. Immediately off the start, our group formed a peloton, and before we were off the pavement the attacks on the front started. I got a little nervous when a few guys hopped off the race track to pass, because I did the same thing my first year racing Sea Otter, but I miss-timed the hop back onto the pavement, and slid out, ending up with road rash from just over my knee to the bottom of my shin. But that’s another story. Nobody in our pack wrecked, and I left the pavement in around 20th place in the peloton. There were some deep rain-shed trenches on the way to the fence and the exit from the track. I assume one of the riders in the front tapped out, because suddenly the whole pack cut speed, 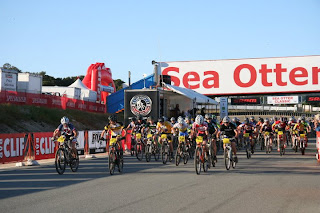 and most of us had to tap out and hop to the open section, were we got back on and started chasing the top group of maybe 8 riders that had broken away. I had lost place count at this point, and the next few miles were just a stream of short single track sections followed by longer fire-road segments, and catching riders and drafting, or working with riders that caught back up to me. When I got to feed zone, I dumped my bottle, grabbed the new one and ripped the attached gu off with my teeth. My dad hollered at me that I was in 18th place. I played the same game of drafting and working 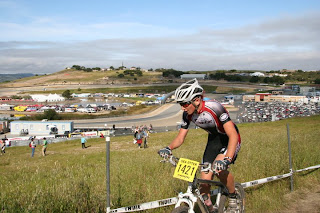 together until I dropped some guys on a hill and time-trialed it on my own for a while through some single track and a fast fire road section. Later I caught up to Austin Gooder, one of the Marin Catholic riders I usually race against in the NorCal High School series. We then caught two more riders in our division. Just before we caught them and transitioned onto the final long fire road section, I said to Austin that we should work together, and we did. We quickly dropped the other two riders, but as we came around a bend I saw my longtime competitor and friend, Hunter Olivier, lying on his back in the tall grass next to the trail. I asked if he needed EMT’s and he grunted, so I took that as a yes and hollered OK. I told the next few adults that I saw, and then his dad when I saw him on that fire road stretch. I later learned that I was the one that got the EMT’s to him. Apparently he had full-body cramps from pushing himself too hard, and he had to go to the hospital, thankfully he is OK now. I chased Austin in to the finish, but he got away 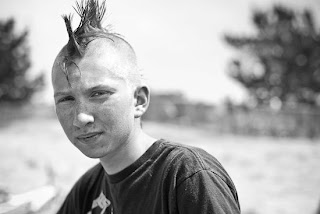 Thank you to Mike from Velodramatic.com for this great black and white photo of me taken after my race.

NorCal #4 at Boggs Mountain next weekend! I’ll keep you posted.