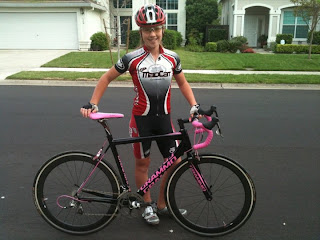 Do you remember what it was like, as a little kid, to get a cool new toy? And all you wanted to do was play with it?
Well, my spiffy new toy happens to be a carbon Grammo C3 road bike. Which also happens to be hot pink. Oh yes.
So, when my good friends Asa and George offered to take me to the Copperopolis road race, what did I say? OH YES.
After a bumpy, windy, hour and a half long drive, we finally got to Copperopolis. I’ve done criteriums and road triathlons before, but never really a full-blown road race. I’ve always stuck more to mountain bike racing, and using road as a training tool for the muddy winters. But, let me remind you of my NEW TOY. (Can you tell I love my new toy?) This bike is so dang amazing; I really couldn’t wait to race it. On the other hand, I really had no idea what to expect.
At the s 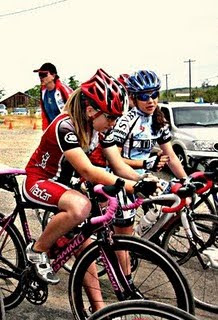 tart line, there were 5 junior 13-14 girls. That’s a pretty good turnout. The 13-14 guys and girls all start in one wave, so there were about 25 people starting with me. Before the start, I chatted with another 14 year old girl, Aliya Traficante. She had a lot more road experience than I and she raced for a big women’s team called Team TIBCO. She was really nice, and I learned that she mountain bikes also! After the start, I stayed with the group of fast guys for the first few miles, as the slower guys and girls fell off the back. Eventually, there were only two girls left in the group: Aliya and me. The super fast group of guys ran away from me, Aliya and a friend of mine, Robert Terra, during the main climb. Aliya was a little ways ahead of Robert and I, and I couldn’t see her. But we were only around 7 miles in; it was a 21 mile race. Robert and I stuck together for a while, switching back and forth and working together through the steep sections of the climb. Then we caught up to another guy, and worked with him. We had a short descent, and then hit a set of rollers, and the two guys ran away from me. I could still see them, but they were just out of range.
I hit a section of twisty, winding turns. I went in for a mountain-bike style turn, and I was shocked as the Grammo leaned inwards and swooped around the turn. Whaatt? That was insane! Let me tell you, that bike corners like a dream. I got the hang of cornering it and I flew through the twisties. 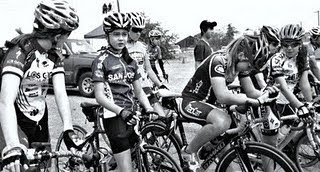 Then the course opened out onto a long, flat straightaway. I could see everything, including Robert and the other guy who’d dropped me on the rollers. Wait… there was three. Not two. And I recognized a long brunette ponytail that belonged to Aliya. I was actually catching up!
The course turned and led through a small rural group of farmhouses. As I rode by a pasture, this huge black cow gave me the craziest look I’ve ever seen. I swear to you, the thing was looking into my soul. Then it opened its mouth and let out an ear-splitting, “MOOOOOOO!!!!!” I tried keeping a straight face, but it didn’t work. I burst out laughing as I rode. Now that I think about it, I probably looked pretty silly, laughing at a mooing cow during a road race. In my defense: I’m a teenager. Things like that are funny to me.
One of the cool things about this race was how popular it was with the locals. All around the course there were people sitting outside their houses on lawn chairs, watching the racers, and cheering us on.
I hit another set of rollers, the group ahead of me in sight. Guessing that the race was within 7 miles of the finish, I picked up my pace and worked to catch the group. I noticed one of the boys had been dropped. I soon caught and passed him and set my sights on Robert and Aliya, who were now just a mere 200 yards ahead. I knew I needed to close the gap before we got to the final climb, or else there was no way I could catch up.
After what seemed like hours, I finally caught up to them. Now, all I had to go was hold on. The three of us worked in a pace line for the rest of the rollers and across a short flat.
When we could finally see the last big climb, the pressure was on and I held onto Robert and Aliya’s wheels, laying low in the back. We stayed together up the climb. Then we finally got to the descent, and the road conditions went from terrible to nearly unridable. I was so in the zone, holding Aliya’s draft that the next time I looked up, Robert was gone and I had no idea if we’d left him or he’d left us.
Aliya started to pull away on the descent. This was the toughest descent I’d ever done. It wasn’t very steep or twisty, but the road was bumpy and there were pot-holes everywhere. I was going so fast over these bumps that my bike was shaking so hard it felt like it was vibrating. I had to hold on a death-grip on my drop bars, because if I didn’t the bumps would shake the bars right out of my hands. But, I got to see just how snappy and stiff this carbon Grammo was. It stuck to the ground and refused to get thrown around by the bumps, and I got the smoothest, most comfortable ride down that hill, that was humanly possible. But, the ride could only be so smooth considering how rough and bumpy the road was. At the bottom, my legs were rested but my hands and arms ached.
I was on Aliya’s wheel when we saw the 1 km to go sign. As we passed it, I took my chance and attacked, jumping around Aliya and accelerating. She didn’t let me go, 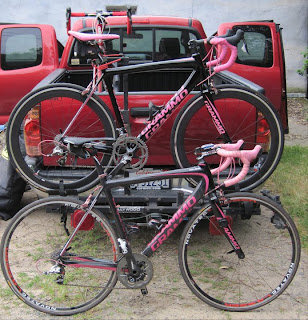 and I could tell she was right behind me as we hit the uphill finish. With everything I had left, I sprinted for the line. I finished about 10 yards ahead of her.
I was so shocked. My first real road race and I won! After catching my breath, I turned around and rode over to Aliya. We congratulated each other and chatted about our races, and how hard that last descent had been. We talked for almost an hour, and we have a lot of things in common! She suggested a few criteriums that would be fun to race, and I suggested she come down to Sacramento to do some MTB races. We exchanged phone numbers so that we could ride together. That was pretty cool because it’s often very hard to find girls my age and skill level to train with.
Copperopolis was a great experience for me for many reasons. I got a taste of real road racing, I learned new tactics, I won a t-shirt, and I made a great new friend.
Also, check out Aliya Traficante’s blog, called Aliya’s Life. http://aliyatraficante.blogspot.com/2011/04/coming-back.html
Keep chasing…

Debut of the Pink Ninja