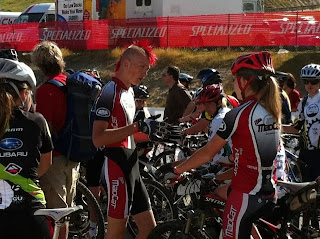 First things first: I love competition. I’d rather race hard and come up second than easily win my category. This was one of the reasons that this year’s Sea Otter Classic was such a great experience for me.
Being a junior narrows down the fields quite a bit, not to mention being a girl. At most races, I’m lucky to have 1 or 2 other girls to race against, and even luckier if they’re good competition. Sea Otter is a great race for me because it brings out the toughest, most hardcore competition. I know that the junior girls who race Sea Otter are serious competition.
From the get-go, I was wired and jittery on race morning (Sunday for the junior racers). After gobbling down my eggs and toast, my mom, our friends Cole and Kirstie, and I headed off to Laguna Seca. I rolled over to the guys at the Unreal Cycles/Unique Sports Company booth to say a quick ‘hello’ before heading to warm-up on a trainer at the National Interscholastic Cycling Association (NICA) tent. The race day butterflies set in as I headed to the start area under the “Sea Otter Classic” banner.
On arrival, I saw a nice group of eight or nine 14 & under racers. There looked to be about five who were around my age. I stood and chatted with a friend of mine, 10 year old McKenzie Ferry, who’d raced Sea Otter with me last year. The two of us were the only returning racers, me racing for the 4th time and her the 2nd time. My brother Wyatt, not long a 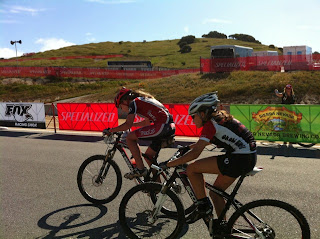 fter finishing his race, hopped the tape and gave McKenzie and me a pre-race pep talk. Gotta love big brothers, huh?
It was exciting to finally roll up to the start line and see many of my fellow Mad Cat teammates cheering for me. Papa Cat (Mike Upchurch, owner of Mad Cat Bicycles) was enthusiastically cheering and pumping his mountain bike above his head. I laughed, but quickly resumed my game face, preparing for battle.
“Junior 14 and under girls…on your marks, get set, GO!” The start was dominated by me and two other girls. The three of us pace lined all the way to the first downhill, where the other girl, Sofia Trujillo (all the way from Ensenada, Mexico), and I pulled ahead of 3rd place. Using my normal strategy, I held her back wheel, waiting to strike. I had the heat on her and she knew it. We stayed together, locked into a one-on-one dual now that we’d dropped the rest of the field. My entire plan was shattered when we reached the sand downhill. A novice rider, not used to deep sand, was fishtailing and sliding all over the place. Sofia managed to get around her, but I didn’t fare so well. As I came around to pass, she swerved in my path. Trying desperately not to hit her, I turned, and my bike bucked forward and I flew over the bars, getting a nice mouthful of sand. I scrambled up and ran my bike down the hill. I remounted and started after Sofia on the long fire road straightaway ahead, but I’d lost crucial seconds and the all important momentum. She was gone.
I buckled down and set into a fast pace, not willing to give up. Because I knew from experience: It’s not over ‘til it’s OVER. I knew I still had a chance; cross country is unpredictable and nothing is impossible. I could catch back up, I’d seen it happen and I’d done it before. I knew one thing for certain: I wasn’t going down without a fight.
I was deep in the pain cave when I hit feed zone. Tossing my empty bottle and taking my fresh one from my dad, I got the report: Sofia had a little over a minute on me, but the most deciding part of the race was still to come, the Three Sisters climbs.
When I reached the end of the single track and looked up at the 5 miles of gravel road climbing to the finish, I ate my Jet Blackberry GU and slammed a couple swigs of Accelerade. Its afterburner time, ba 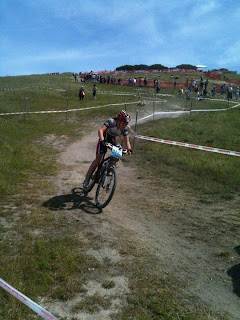 by.
By now I was pretty worn out and the burn had crept into my legs. I knew this was my last chance and I was going to give it everything I had. My mind commanded “GO!” and my legs kept screaming “NO!” I hit the second climb and there was a group of spectators cheering. As I passed, one yelled, “Damn! Look at the little one go!”
Now, I knew he meant it well, but know this: I DO NOT like to be called little. EVER. Call me quirky.
Clicking up two gears, my mind growled, “We’ll see who’s little, eh?” I stood out of the saddle and passed a big group of about ten other riders, and kept full gas all the way to the top of the last climb. Hitting the final single track leading to hillside finish, I crested the top of the hill and saw Sofia crossing the finish line. So close. I crossed the finish line; knowing second was great at such a big race but still wishing for a different outcome. Sofia rolled over to me and, with a heavy Spanish accent, congratulated me and we shared some post-race nostalgia. Well, if I’ve got to lose to someone, she was a nice girl and a strong rider. Her dad came up and asked if I would take a picture with Sofia. Of course, I did, and then headed down to the Expo and over to the podium stage. I stood with Sofia and the third p 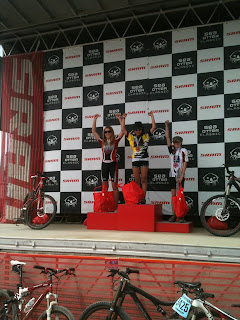 lace finisher Haley Batten (from Park City, Utah) in the podium staging area. After about 25 minutes of waiting, we were called up into the shaded waiting area behind the podium, and we happened to be joined by the Pro Downhillers who’d made the podium. That was pretty cool. When we were called to the podium, I shook hands with my competitors and stood on the second place spot.
All in all, the 2011 Sea Otter Classic was a great experience and I was thrilled to have such strong competition in my category. It was a great opportunity for me to go toe-to-toe with the best junior racers in the country, and out of the country.
Second things second: I came home with an AMAZING disco pink Grammo C3 Pro Edition road bike(who was quickly dubbed Pink Ninja).
Keep chasing…