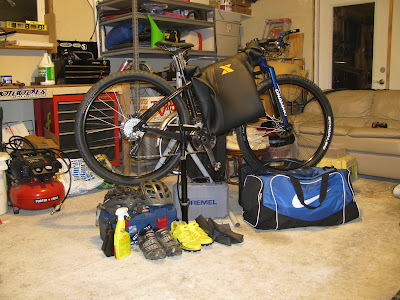 Sacramento, CA – Home of the 2011 Xterra Real put on by Total Body Fitness is now history. This was my season kick off race and I was excited to get down there and compete! I had a friend decide that she wanted to go down and spend the weekend with me. Originally she was going to do the super sprint but due to injuries from coed soccer she didn’t feel as if she was where she needed to be to compete. However, being a trooper and true to her word, she still came down for support. I can’t thank her enough for being there. We decided to leave Friday right when I got off work. The night before I had packed everything up so it would be a quick transition out of Ashland. Surprisingly, work went by extremely fast and before I knew it, it was time to leave. Of course as we headed out I got word that both passes may be backed up and chains were going to be required . . . BUMMER . . . Luckily we made it up and over with no issues. We got into Sacramento later Friday night. 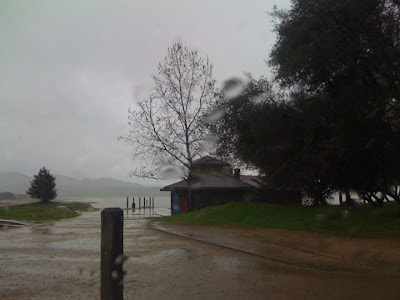 A friend was nice enough to lend us their house for the weekend which was only 30 minutes from the race. This was much better than camping, especially considering the weather they were having in Folsom. Never having been to Folsom before, I knew it was necessary for a pre-ride regardless of conditions (see above). Early afternoon Saturday we packed the truck and headed out to the lake for a little practice. Raining, windy and cold we spent almost 2 hours checking the course out. Boy was it muddy! I knew it was going to be important to be out of the water early in order to not get hung up behind a big group of riders. After 2 hours in these conditions I was ready to get back to our friends house and get everything ready for race day. I was a little nervous about running a rigid front but after my one loop I knew that I was going to be alright.  I get a little amped before the races, this one was no different and I think my friend was getting a little sick of all my Xterra talk so Saturday night we decided to rent a movie to relax my nerves. The movie worked, helped me settle down and sleep easy. 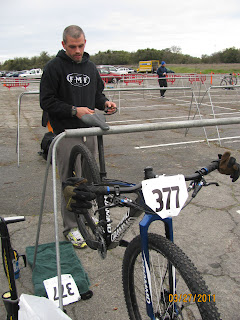 Sunday morning I wanted to be there at 7 a.m. when transitions opened so I could have first pick at my rack. As you can see in the picture I was one of the first to setup. After I got set up all that was left to do was wait for the race. We had three hours. I was dreading the swim, the water temperature was bleak, sub 50 degrees.

I was excited to see the specialized van pull in full of some pro’s, two of those being 3x World Champion Melanie McQuaid and Iron-man stand out Ben Hoffman. 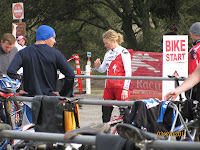 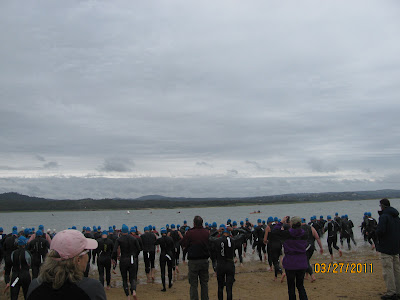 The time had come to suit up and head down to the water. I had planned on getting out and doing at least a 300 yard warm up. That idea was short lived when I ducked my head under the water and got an instant brain freeze. I figured I would just swim a little bit and try to get comfortable. Before I knew it they were calling us out for the start. Oh boy, for me this is the scariest part of the race. 170+ people mass start, all racing for the first buoy. I looked for my friend in the crowd and wanted a reassuring/calming hug. I turned around and placed myself right up with the front runners. I didn’t train all this time to start in the middle or back of the pack. I came to push my limits and that’s what I was going to do. 5-4-3-2-1 GO!!! And I was dolphin diving like a 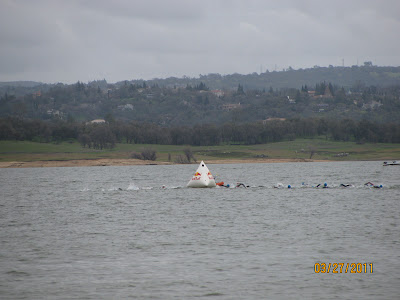 mad man. The water was a little shallow so I had 6-7 dolphin dives before I was able to start free stroking. I didn’t want to get caught up in the masses behind me so I sprinted to the first turn. The morning was overcast, the buoys where white and my goggles stayed fogged during the entire swim. Keeping in line with the buoys was extremely difficult. But I felt good. I didn’t get swam over, kicked or pulled. The first buoy took forever to get to and making the corner was interesting, as always. The turn went well and I was headed for the beach. At the time I thought I was in the middle of the pack, maybe 80ish. Finally I hit the beach and had a 200 yard sprint up to transition. As I was getting out of the water I heard my friend yelling.

When I passed her she shouted, “26! 26! Pick it up!”. Pick it up I did. I was excited to be that far up and saw that I could pass at least 5-8 people by sprinting to transition, so I did. When I ran by the announcer I saw that Melanie was just a little ahead of me. As I was entering transition she was pulling out. For me this was a confidence booster and I picked it up a little bit. Mountain biking is my strong suit, and I knew I would be able to catch a few people on the bike. 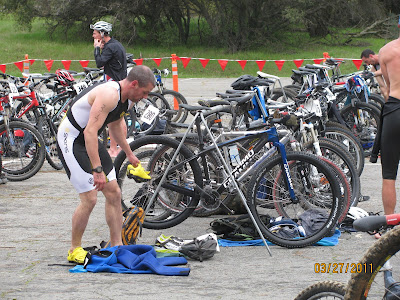 I couldn’t believe it, the trail was in worse shape and even more flooded than the day before.  The course was two laps. I really didn’t want to get caught up in the mess of things in the second lap so I pushed hard. It wasn’t 5 minutes into the bike ride when I came up on Melanie. She was a sitting duck in what looked like a pond in the middle of the trail and I had seen a decent line the day before to the left and was able to make a clean pass. After that I felt great and began to really push it. I passed a bunch more people and maintained a good pace for the rest of the first lap. Right before I tucked back into the woods for the second lap my friend was yelling, “9th, 9th! Your 9th! Pick it up, they’re close!”. For me this was like a shot of adrenaline. I picked up the pace and was able to catch a few more racers. I figured I was in 7th place and was in striking distance of the front runners. Half way through the second lap of the bike ride I went over the bars, giving up a spot but didn’t injure myself or the bike. 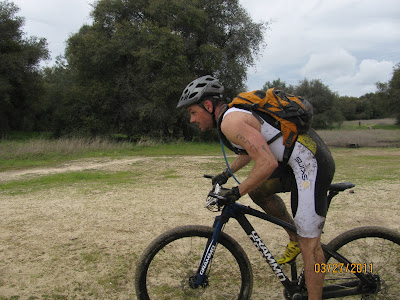 I jumped back on and got my spot back. Out of nowhere the bike decided to start ghost shifting due to the ridiculous amount of mud. There was just so much sand and dirt in the derailleurs I was stuck in the big ring for the rest of the bike and I knew I had two climbs left. I pushed through it and came up on Damian Gonzalez. I was bummed to see that he had a broken chain and I offered help. This is NOT the way you want to pass someone, but he said he was set. After passing him I was able to get the next two riders in my site, though I was running out of time on the bike to pass them and it would have to wait for the run. I hit T2 fast and was in and out. 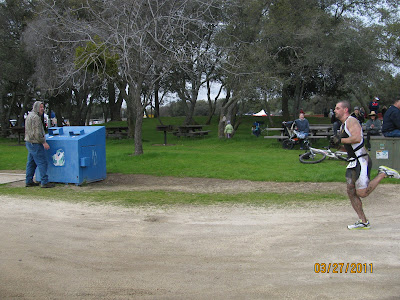 Coming out of T2 I saw my competition just ahead of me. I knew I was in 6th place. I figured I would go out for the first little bit and get my legs under me then push it. It was only a 3.5 mile run. Sadly, I couldn’t reel anyone in. When I hit the single track I started cramping horribly. In so much pain, I was trying to focus on all the training that I had done for this race and not the fact that I couldn’t flex my leg. I knew someone was going to pass me as I was barely moving along. Sure enough, two racers went on by. The first passed but I kept him within arms reach. 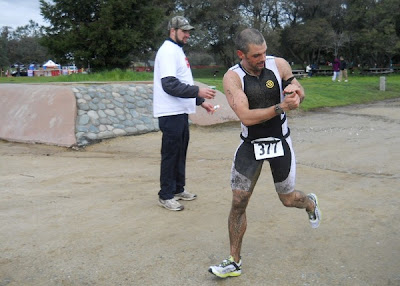 I saw that he was my age group and there was no way I was letting him go. After I figured out that these cramps weren’t going anywhere I sucked it up and passed him back. 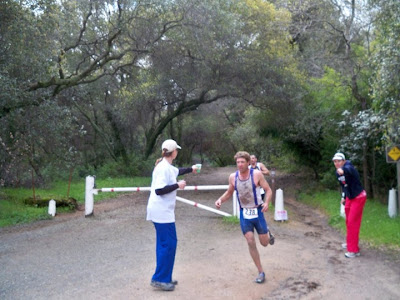 Then I got passed by the guy I was playing tit for tat with on the mountain bike ride. He passed me right at the base of the hill and I was able to talk myself into hanging onto him and not letting him pull away. The cramps came and went a few times but after the hill I knew we only had a mile and a half left. My strategy was to have him lead me in and then pick up the pace at the end and see where that put me. It worked. I followed him right to the end and with about an eighth of a mile left I emptied the tank. I was afraid I took off a little too soon and that he might pass me back, but I was able to hold him off. 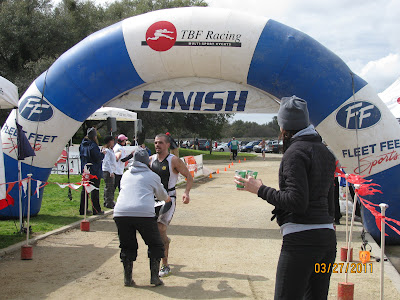 I ended up 6th overall and 4th for amateurs. For my age group (25-29) I finished first. This was my fourth Xterra and my best finish yet. Besides the cramping I was extremely happy with everything. It was a great race! I want to thank T.B.F. for putting on such a great event, all the volunteers and people for cheering everyone on and especially my nameless friend for coming along. Y’all made it a special day. Also, congratulations to everyone who finished the race. It was great to see so many people come out. For me, it’s back to training. Texas is just 3 short weeks away and I have to be ready !!! 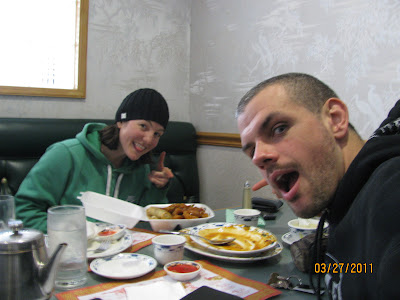 That’s right, Chinese food. I figured I earned it !!! 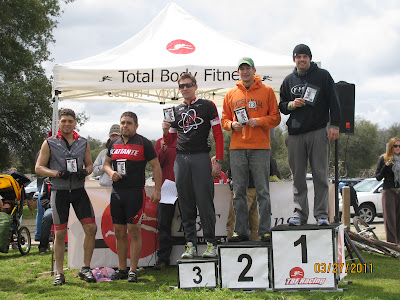