Hey all!! Well I had a crazy weekend!! I had not 1, not 2, but 3 races! Friday night I raced the Sierra Nevada high school Short Track race at the Folsom rodeo grounds. I had a big advantage on this course, as it was roughly the same as all the Rodeo CX races, minus th 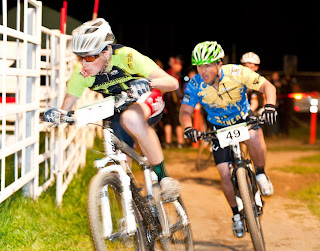 e barriers of course. And the JV guys were only racing 3 laps, much shorter than a men’s C CX race. However, the race directors added an interesting twist to the start: a Le Mans start! This totally blew my normal shoot off the front strategy to pieces, since it would be a mass of guys running in bike shoes and scrambling to grab their bikes. I ended up getting on the bike out of the cluster in about 4th place. I quickly took 3rd on the road climb away from the stadium. On the straight into the park above the stadium, I took 2nd, and then once we hit the series of hairpin turns, I jumped up into 1st. I held the top group that filtered up behind me off the entire end of the first lap, and the second lap. At the end of the second lap, a rider came around in a trem 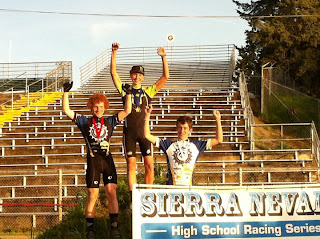 endously dangerous turn inside the stadium, almost taking me out by cutting me off on the inside. However, I saved the potential wreck, and held behind him up the hill, and as soon as we hit the straight away over the stadium, I hunkered down in an aero position and laid out all my power to regain the lead, and then ripped though the turns, blasting through the rest of the course as fast as I could possibly go. I was actually able to open a small gap on the rest of the field, and slam it home in the stadium for the win. I had a blast in that race, and a superb result!
On Saturday afternoon, I returned for two laps of the 5.5 mile XC course that wound through the Folsom Prison grounds! These trails can’t be ridden unless you do trail work on them or race them, and there are only a couple of races on it a year. Same race directors from the short track, so another Le Mans start! Once again, the start strategy turns into a running scramble! I ended up coming out of the stadium in about 5th place. I worked my way up to 3rd, and the 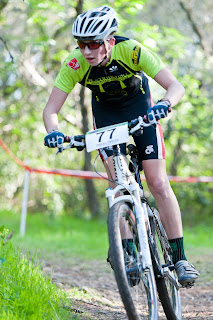 n the two guys in front opened up a little gap on the field. Right as we hit single track a guy came around me, and another passed me through some of the following turns that opened up onto a fire road, putting me in 5th place. On the first major climb, I instantly started to feel the race the night before. Though I held onto the two riders in front of me, another caught the back of our group. We stayed together through the next series of hills, but slowly the two ahead of me started to slide away, darn tired legs! Right before one of the last single track sections, the rider behind me jumped around me. I held with him through the end of the first lap, and into the beginning of the second. However, when we reached the major fire road climb, I couldn’t hang with him and he pulled away. I chased after him as hard as I could for the remainder of the lap, But I wouldn’t catch him and finished 6th. I was a little disappointed about this finish, but it wasn’t too bad considering my tired legs.
After the race my teammate Cole and I went down and iced our legs in the frigid lake Natomas, which is currently being filled with water from the bottom of Folsom lake, which is being filled by snowmelt. The water temp is in the low 40’s, beyond feeling cold, it just hurt. However, this was what my coach told me to do in order to have some legs on Sunday, so I did it. Later that night, we got to go soak in a hot tub, ahhhh! I think both of these really helped my tired legs recover for Sunday. 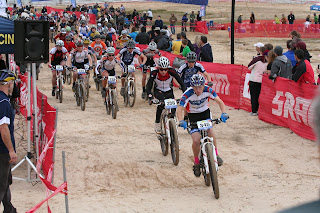 The next morning I had the first full NorCal high school mountain bike race. This race was on my home course, and it was being run the more difficult direction, counter clockwise. JV Division 2 (all independent racers and teams with less than 16 racers) raced 3 laps of the 6.5 mile course. This race features an uphill sand start, as races at this venue often do. I was 6th place in the prologue race two weeks before, so earned a top 10 call-up to the start line. Getting a call-up to the start line is very valuable in a field of 60+ racers. At the top of the uphill sand start, almost through the hair-pin turn taking us back down the hill, the rider next to me slammed his front tire into mine putting down in the sand. I instantly went from 6th to about 30th and scraped up my knee in the process. I had to turn it on through the flats to improve my position as best I could before we hit the single track ahead. I was constantly passing guys and trying to catch the lead group. My legs felt amazingly strong, considering the previous two days. I wasn’t sure how far up I was until I caught one of the Santa Cruz racers who I knew would be close to the top group, and HE was the racer who took me out 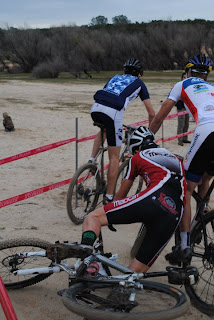 on the start. Our position was confirmed when I came around a corner and saw my mom who was working as a course marshal. She hollered to me that I was in 7th place. I raced with the Santa Cruz rider through the end of that lap, and we worked our way through many of the slower JV D 1 riders, as well as the slower Varsity riders, both waves having left before ours. We worked the traffic all through the second lap, constantly swapping places. At the end of that lap, we caught another rider in our division. As we came around into the last lap, I felt my legs start to cramp up just a little. The Santa Cruz rider and the other guy opened a small gap through the flats, but I caught right up when we hit single track. We managed to drop the rider we caught, but my legs were degrading fast… full effort was bringing on cramps so I had to ease up a touch. Late in the last lap a friend in my division, Parker, came by me with a head of steam. I couldn’t stay on him, but held the rest off. I ended up coming in 7th out of 48 JV finishers. As soon as I stopped after the finish line, my legs cramped horribly and I fell over and had to be helped away. My legs felt much better after some massage, electrolytes, salt tabs, and a spin on the trainer. I am very happy with this weekend, especially considering the triple races.
Thanks to all my friends and family that came out to cheer, support, and volunteer. I couldn’t do it without you. Now that race season is in full swing, go to Unreal Cycles for your cycling needs. I’ll keep you posted!
Triple Race Weekend! (OUCH)