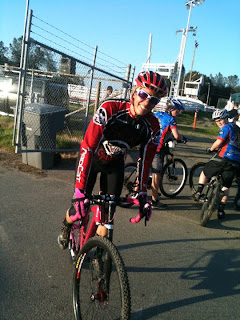 Some bikes just hum. They turn heads and create a buzz wherever they roll. I knew when I opened the box that the Grammo Carbon 29er in custom Camaro pink was indeed a hummer 🙂 I felt like the build had to showcase the bling of this gorgeous frame – It was imperative that I come up with something very special. But what could I do that was unusual enough to catch the eye, and just crazy cool enough to lure even the most jaded bike snobs into cocking their heads and asking questions? I was stumped for about ten minutes, then it hit me like a red snapper to the face. Drop bars and a Lefty. Ok, so drop bars aren’t that unusual, and Lefty’s have been around a while, but in combination with the rockstar pink frame, it would be like a shiny, wiggly, jiggly lure cast upon a warm Summer’s lake. One problem – what about brakes? 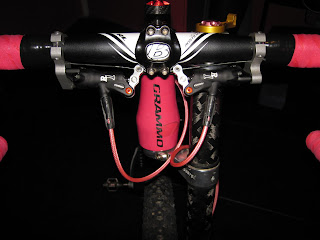 The frame only had disc tabs, not surprising, but a challenge. I hate mechanicals. I am a spoiled little biotch when it comes to brakes. I tolerate rim brakes on road and cross bikes cuz i hardly ever use them, but on a mountain bike, hydraulic disc brakes are the only option for me. What to do, what to do… Then, the bike gods looked down from the endless chocolate ribbons of mountain bike heaven and smiled upon me. In Bend, Oregon, they led me to my savior, Tim Cannard. Tim is the mastermind behind the 324 hydraulic brake adaptor for drop bar levers. Basically, it takes a set of Formula R1 disc brakes and flip flops them into a cable actuated external hydraulic reservoir. He affectionately calls them 324’s, cuz it took three nights and 24 beers to come up with. Over quite a few more beers, and a bit of flirting and flattery over his prototypes, I convinced Tim that I needed to have a conversion kit more than anyone else in the world. He promised me I would have the number 2 set – success! Now he likes to call me “number 2” 🙂 So, problem solved. And they feel amazing! It is a wonderful thing to grab a road brake lever with one finger and actually stop. 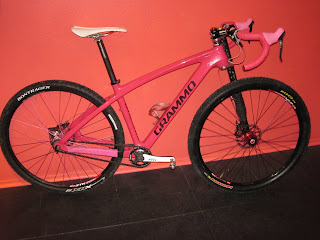 The build went relatively smoothly, it just took a while waiting for all the bits and pieces. The Pinkness had it’s official debut at the Sierra League High School race in Folsom this weekend where I was the course director and roving course Marshall. My plan had come together better than I could have imagined. I could not roll The Pinkness more than 50 feet without comments or questions. I had created a build worthy of this incredible frame. Oh, and it rides pretty damn good too. At least it did ’til I blew up the Lefty, but that is a whole nuther story.