Hi all! So I’ve had some sweet rides these past weeks, especially my race last weekend! On Thursday I did my first night ride, on the trail I talked about last post. I had a blast, even with my light not being charged and dying half 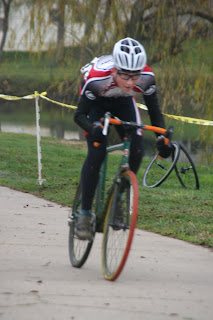 way through. Oops!! Major learning there, always plug them in that morning! Luckily, one of my awesome teamates I was riding with let me use a battery, since he had two lights. Thanks again Mike! Then last Saturday, I had my best Cyclcocross race of the season! It was the Sacramento Cyclocross race at Laguna Del Sol resort. I left the start line with my customary hey-who’s-awake start, which really lets me see who wants it and who can hang right away. I finished the first lap in 4th place. At this point I looked at the 5th place guy next to me and said, “Hey lets work together, if those guys get a gap they’re gone.” So we took turns pulling on the straights, and then when we caught 3rd I said “OK I’m goin!” and slingshot around the guy I was working with across the gap and around the 3rd place racer. I had hoped that the guy I was working with would come with me, but I actually gapped b 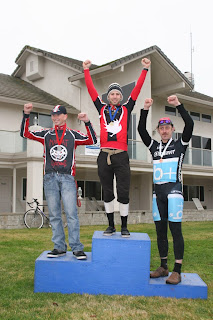 oth him and 3rd very quickly. Afterward he said that that the pace I was pushing was just too high for him, and that he had never thought to use tactics like that in a cross race before. Anyways, I then hammered down the gap to 2nd and passed him through one of the sets of barriers. At this point it just became a time trial for the last lap, as none of us had seen 1st place since lap 1. I had already gapped 2nd, now 3rd, and just had to tell myself to hunker down in the drops and not look back, but try and put the power out enough to catch first. Sadly, I just wasn’t able to catch him, or even see him for the rest of the race. On a happier note, the racer I that I had worked with earlier in the race caught 3rd, and I got to see him sprint out the finish with 3rd, and come out on top, rounding out the podium. It was a majorly grassy race, nearly the entire course was grass. On the pre-ride, I thought it was not a ton of fun, but it was truly a course designed for racing(thanks Asa), because it was very fun at high speed, and under high pressure. I am super excited for the final Sacramento Cyclocross race, and the coming mountain bike race season! I’ll keep you posted.

One thought on “Awesome Weekend!!”