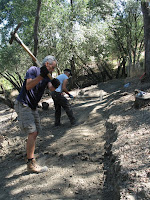 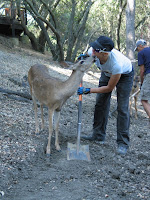 So just before my trip to Whistler at the end of July, Mr. Unreal blessed me with an amazing Genius Cronometro TT bike to race and review at the weekly South Canal Time Trial here in Sacramento. I was so excited I even bought myself one of those crazy aero helmets and real roadie shoes and pedals. Yes, I was all over the dark side like road rash on the 2010 Tour. The need to prove I didn’t suck at TT was high and I went right from my DH bike to the Cronometro the day after returning from Whistler to practice (that was an odd feeling – talk about two different bikes!) Yeah, I was ready to slice the wind! Then the phone rang.
For some time I had known that I was going to get to help set up the “Race from Folsom Prison” MTB course for the 3rd Annual Folsom Cyclebration Stage race; really all we had to do was some scraping and bench reclamation on the Folsom Prison grounds, nothing to get in the way of training. 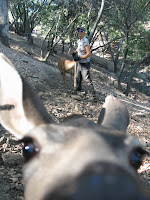 The course was going to be very cool. For the first time, the public was going to get to ride on the historic Folsom Prison grounds, along with some sweet trails through the Folsom Rodeo grounds and the State Park which had never been raced on before. The only not so cool part of the course was going be getting from the Prison Grounds back to the Rodeo Grounds. As it was, the last bit had to involve parking lots and public roads which was just not going to be fun for anybody. Then the phone call. Brian, the race director called me and said “Guess what!!! We are going to get to build a trail through the deer pen in the Folsom Zoo!!!” Well, “we” turned out to mean “me”. I had a Mcleod, a Maddox, a Rake, a Shovel and Month. 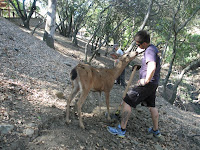 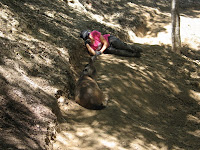 I’ll tell you, P90X ain’t got nuthin’ on the “Build a Trail by Hand in a Month” training plan. Tony Horton would have been crying like a little girl. Yes, I had a some volunteers, but very few of them came back for more after a day of Deer Pen Plyometrics. The exception to this pattern was Ryan Wenker – he is crazy and I sincerely appreciate his help. Needless to say, my riding got put on the back burner. 6 hours a day 5 or 6 days a week put a serious crimp in my racing plan and I knew right away that my bikes were going to be lonely for a bit. 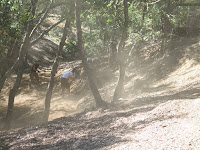 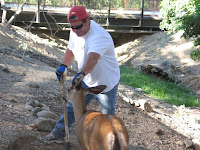 I wasn’t lonely in the deer pen though, even when I didn’t have any volunteers, I had my little inspectors. They inspected my tools, my lunch box, my pockets and my trail work every day. Who knew that deer could be so friendly? I had no idea. They were like playful puppy dogs, and it was difficult to work when they wanted to be scratched behind the ears or to play head butt. They also have no concept of the danger of swinging tools, and would constantly get in the way. Even so, Cutest Thing EVER!!! 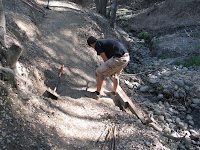 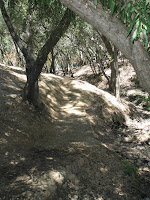 I won’t bore you with the details of trail work, let’s just say I was sweaty, dirty and tired every day. All I wanted to do when I got home was collapse on the couch with a beer and a LOT of food. TT race? No way. Just the thought of riding my bike made me cringe. By the last week of building before the race, it was all I could do to get out of bed. My back ached, my fingers could barley grip, and I had blisters on my callouses that survived so long they developed their own personalities. By the end I had Madeline Kahn in my head singing “I’m Tired” all day, which reminds me, I need to rent Blazing Saddles. I was really hoping all this was going to be worth the effort, since unlike Lilly Von Schtupp, I didn’t have a squad of burly soldiers to carry me off stage when I passed out.

Turns out it was worth it. Since I knew I was not going to be able to race my own trail, I asked to course marshal the Zoo Trail. It was the smiles on the faces of the racers that made it worth it. I was moved by how many riders knew that I had built that section and they all spared enough breath in the middle of the race to say stuff like “thanks Asa” and “awesome” and “holy crap!” – that last one is a direct quote 🙂 Afterwords, I was surprised by the cheers and applause when the announcer gave me props – the warm, fuzzy feeling overwhelmed the aches in my body and I knew that I had done a good thing. The free beer didn’t hurt either. On top of everything, I found out that the trail is going to be used by children visiting the zoo to hike in the deer pen and pet them up close, not through a fence. Before, the small canyon where the deer live was way to steep and treacherous to let children experience the deer up close. Now they will be able to hike the length of the deer pen in safety and interact with them in their own environment. How cool is that??

That’s all for now. I will be back on the bike soon. It is almost Cyclocross Season!!!
I would like to thank:

A different kind of Time Trial

One thought on “A different kind of Time Trial”